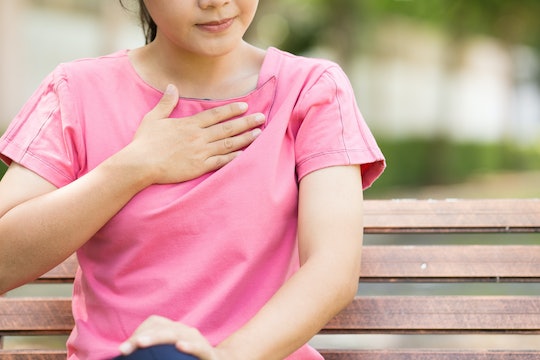 Nausea and fatigue are the classic early signs of pregnancy, but the list of strange sensations is almost impossibly long, and everyone experiences early pregnancy differently. Dizziness is one weird early pregnancy symptom I personally experienced (and I certainly wasn't a fan). But what about "air hunger?" Is feeling out of breath a sign of pregnancy? Interestingly, shortness of breath, even in early days, is actually pretty common.

Dr. Adrienne Zertuche, OB-GYN at a division of Atlanta Women’s Healthcare Specialists, tells Romper in an email interview that approximately 60 to 70 percent of women experience dyspnea, which WebMD defined as shortness of breath, during their pregnancies. "Dyspnea may start as early as the first trimester, often worsens in the second trimester, and then stabilizes in the third trimester," explains Zertuche. While it's not necessarily a sign of pregnancy — you can experience dyspnea without a baby on board, too — it's a very common symptom.

What causes that out of breath feeling in the first trimester and beyond? While no one knows for sure, experts point to a variety of possible factors. For one thing, as your uterus grows, it puts "upward pressure" on the diaphragm, Zertuche notes, which makes it harder to get a full breath of air. Another factor is, of course, hormonal. "Progesterone, a hormone important in maintaining the pregnancy, stimulates hyperventilation (faster breathing) to ensure the developing baby has plentiful oxygen," says Zertuche. According to the Korean Journal of Internal Medicine, women might also be hyperaware of their breathing and ventilation because they're more chemically sensitive to carbon monoxide and hypoxia, or not getting enough air. Basically, your body is on high oxygen alert, and for good reason. The study reported that some women may also simply be more sensitive to this feeling than others.

When do women start feeling short of breath? According to a study in the British Journal of Obstetrics and Gynaecology, almost half of women experienced breathlessness before 19 weeks. By 31 weeks, 76 percent of women reported feeling air hunger, or shortness of breath, at some point. Interestingly, pregnancy dyspnea improves as women approach their due dates, noted the Korean Journal of Internal Medicine, so you probably don't need to worry that you'll be feeling extra out of breath on the day you go into labor.

It's pretty incredible to think that pregnancy impacts so much about your physical reality — from what you crave at meals to how you breathe. For most women, feeling out of breath during pregnancy isn't cause for concern. Sometimes, however, dyspnea may be associated with a more serious health issue. As a study in Science Direct showed, normal pregnancy shortness of breath is generally not accompanied by a cough or wheeze. If you're wheezing or coughing, or have a history of respiratory problems like asthma, you should see your doctor to rule out some pretty serious stuff. Assuming you're not actually struggling to breathe, but just feel like you've run around the block most of the time, you're probably fine. Of course, it's always a good idea to tell your doctor if you're worried.

I experienced pregnancy as a staircase of bizarre symptoms. Aches and pains, sudden nerve pain, and yes, feeling short of breath. As soon as I got used to one strange sensation, up popped another. It's crazy-making stuff. If you're just starting your pregnancy, my advice is to settle in for an unpredictable journey, and try not to get too frustrated when your non-pregnant partner doesn't understand how weird you're feeling. Whenever an uncomfortable sensation starts to get your goat, try taking a long, deep breath. It really helps.

More Like This
Guys, We Need To Talk About Pregnancy Farts
Is Raspberry Leaf Tea Safe To Drink During Pregnancy?
Is Vape Smoke Bad For Pregnancy? Experts Explain The Risks
Dealing With Postpartum Back Pain? Physical Therapists Share Their Tips
What Parents Are Talking About — Delivered Straight To Your Inbox