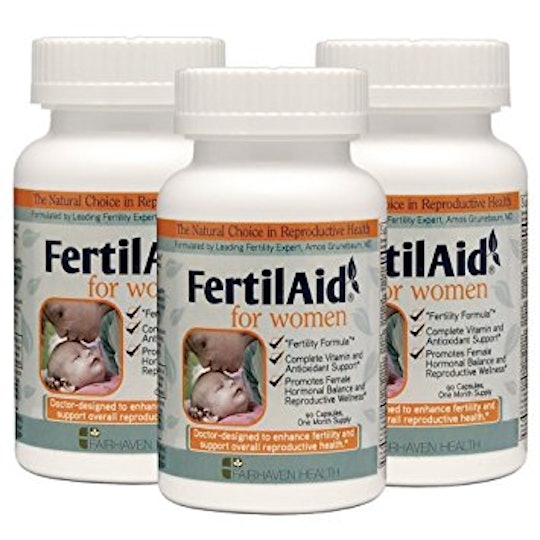 As a woman who's spent years of her life trying to conceive (TTC), I will tell you that I've read studies until my eyes cross, listened to every old wives' tale, and vigorously researched every potential roadblock or pathway to becoming a mother. I've had acupuncture and seen a chiropractor, even though I logically understood there isn't well documented evidence as to their benefits; I was simply desperate. Needless to say, had I seen the ads for FertilAid when I was TTC, I'd have been incredibly intrigued. But is FertilAid safe, or should you let this bit of assistance pass you by?

FertilAid is the proprietary name for a group of supplements by the Fairhaven Health Corporation. It is purportedly designed to help both men and women achieve peak fertility potential with its trademarked formula of botanicals and minerals. It contains all manner of ingredients from ginseng to red clover, and while it has the endorsement of a few OB-GYNs, it's not approved by the Food and Drug Administration (FDA), and is not regulated by any other body. The research on the ingredients are also somewhat worrisome, given red clover's propensity for causing infertility in cows, as noted by the University of Maryland Medical Center, which is the exact opposite of its intended effect on humans.

What bothers me most is that there is such little explanation given on the website as to why this blend is used, and what the specific antioxidants and herbs are used for. It's not like this is a new drug from the FDA trials that has undergone years of study and experimentation and gets the government's stamp of approval and support from the public. This is a new supplement that's becoming part of the "natural health" market success using herbs that have varying levels of substantiated claims. Not only that, but what happens when these herbs are combined? Other than the single OB-GYN, there is no other professional standing by this drug. There isn't any peer review or randomized study to follow.

On Amazon, the reviews are nothing if not mixed. In fact, they're almost polarized. There are a lot of five star reviews, touting the awesome way this drug supposedly worked and helped these people get pregnant. There are also a ton of one star reviews which read like the diaries of so many of us who struggle to conceive. "Didn't work." "Still not pregnant." "No BFP [big fat positive] after using," and one very concerning review who spoke of how her cycle was turned upside down after using it. Scary stuff.

I asked board certified OB-GYN, Dr. Amy Tuteur, also known as "The Skeptical OB," about Fertilaid. She tells Romper, "It’s probably safe, but there’s no evidence it improves fertility and no reason to think it would. Sadly, products like this prey on women’s fears." The product's own website reads:

According to the BMJ, by six months, 75 percent of couples conceive. However, by one year? It's a full 95 percent of couples. That means that 20 percent of people could read this, take it, and attribute their success to this supplement, even if it was just a matter of course. As someone who's been in that 20 percent, I can tell you, it's a daunting place to be, and when you're grasping at straws, you just might also grab for a bottle. You just need to know that there's simply not enough proof that this works. Talk to a fertility specialist if you're having trouble getting pregnant before jumping on this bandwagon.

More Like This
How Much Hair Loss Is Normal? 9 Signs You’re Losing Too Much Hair
6 Sex Positions To Reduce Leg Pain
The Difference Between The PICU & The NICU
Are You Leaking Amniotic Fluid Or Is It Normal Discharge? Experts Explain