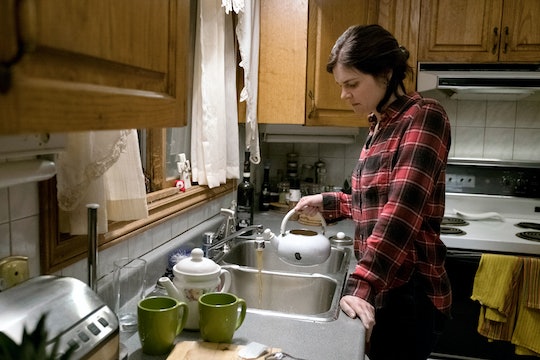 This Lifetime Movie Is Taking On The Water Crisis In Flint, Michigan

In 2014, the horrors of the water crisis in Flint, Michigan made national news. Now, the story is being dramatized for television. But is Flint based on a true story? This Lifetime movie takes on telling the story of the crisis that deeply affected the city's residents. It's still unclear how much of the drama in the movie will be fictional, but the crisis was definitely a real event. And the major players in the story are definitely based on real people.

The main drama of the movie will focus on four Flint women who come forward to fight their local government in the wake of the water crisis, named Iza Banks, LeeAnne Walters, Melissa Mays, and Nayyirah Shariff, played by Queen Latifah, Betsy Brant, Marin Ireland, and Jill Scott, respectively. Of those characters, Walters, Mays, and Shariff are all based on real women of the same names. Walters and Mays were moved to act when they began noticing brown water coming out of their taps as well as terrifying physical ailments in themselves and their children including skin rashes, hair loss, and even more disturbing long-term diseases. Shariff is a longtime activist in Flint, and is an active member of the Black Lives Matter movement.

The crisis began in 2014, when the municipal government switched the water source for Flint from the Detroit water system, which draws its water from Lake Huron, to the Flint River. Officials reportedly did not treat the water, and thus allowed lead to leach from the pipes and into the city's drinking water. Even when confronted with symptoms of lead poisoning, residents were told that the water was perfectly safe to drink. Though the water source has now been switched back to the Detroit system, the damage to the old, lead-based pipes has been done. Three years later, Flint residents still cannot use their tap water safely without filters. Permanent damage has been done to families, including Mays who says that she suffers from a variety of diseases including seizures, the beginning of cirrhosis, and osteoarthritis.

The Lifetime movie looks like it will focus primarily on Walters, who was among the first to insist that her water be tested. All four of her children tested positive for lead exposure, and one of her three-year-old twins, who already had a weakened immune system, had full-on lead-poisoning which can lead to diminished IQ and behavioral problems later in life. After exhaustively researching the situation, Walters contacted a manager at the EPA's midwest water division, who introduced her to Marc Edwards, an expert in lead corrosion at Virginia Tech. A local pediatrician, Dr. Mona Hanna-Attisha began testing children for lead poisoning and noticed seriously high correlations between the worst affected areas and a doubled or tripled increase in lead exposure in kids. All of these players appear under their real names in the film.

Now, even with national media attention and several civil and criminal suits taken against Flint officials, the crisis still isn't over. Over 30,000 pipes need to be replaced, a process which could take an additional two to three years. The Facebook page for Mays' organization Water You Fighting For talks about how the Lifetime movie can help bring people's attention to the crisis still ongoing. The post reads:

In case people are wondering what the Lifetime movie can do, it can remind the world that we are still suffering in Flint and that the #FlintWaterCrisis is nowhere near over. We need this because people outside of our little bubble think all is well because they haven't heard anything about us in a while.

It's not over in Flint. And these women aren't going to stop until it is.