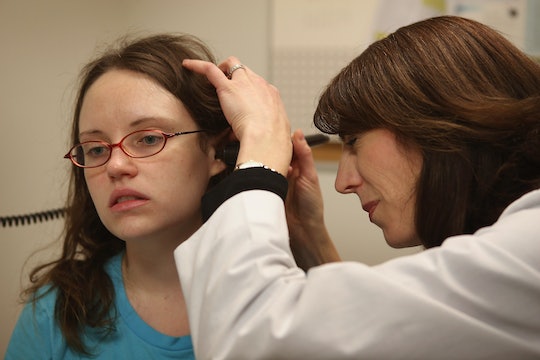 Is Flu Season 2018 Getting Better? It Has To End Eventually

Chances are, you or a loved one has felt the effects of this year's flu outbreak. It's been rough, but every flu season has to end sometime. So is flu season 2018 getting better, or are we still in for weeks and weeks of this malady? There is some good news on the flu front.

By most accounts, the worst of flu season 2017 to 2018 has already passed. "Today’s flu data show activity is down significantly for the second consecutive week, which means we peaked in early February,” said the Centers for Disease Control and Prevention (CDC) spokeswoman Kristen Nordlund in The Washington Post in early March. “However, this is about the same level of influenza-like-illness that we saw at the peak of last season, so there is still a lot of flu out there.” In other words, this flu season is still potentially dangerous even in its decline.

And by all accounts, the statistics for this year's flu outbreak are grim. At least 133 influenza-associated pediatric deaths have occurred during the 2017 to 2018 flu season, according to reports from the CDC. When you think about the number of families affected by these deaths, it's a chilling and heartbreaking reality.

It's also worth noting that only pediatric deaths are closely monitored and reported during an outbreak. Flu-related deaths in adults are not required to be reported to the CDC, so their numbers can only be estimated, as further noted by the CDC. Because seasonal flu can lead to death from complications such as pneumonia, the CDC's ability to accurately track these numbers is somewhat compromised. Overall, the total number of deaths related to this year's flu outbreak is unknown, but general estimates of flu-related adult deaths can number in the thousands. It's scary stuff.

Unfortunately, the exact reason why this year's flu outbreak was so bad is not totally understood. In fact, flu activity in general is still something of a mystery. “It’s just one of those continuing questions with influenza,” said CDC director Dr. Anne Schuchat in NBC News. “Every year is different.” Atmospheric changes, including temperature and humidity, may affect seasonal flu patterns, according to a 2014 study in the Journal of Virology. But the exact reasons behind each year's spread of the flu are still under investigation, though it may have to do with the fact that the flu vaccine administered this season was only 17 percent effective against the influenza strain that went viral this year, reported Time.

Thankfully, there are some simple ways to protect yourself and your family from the flu while it's still active. It isn't too late in the game to get a flu shot, which is recommended "as long as flu viruses are circulating" by the CDC. Because there's still plenty of flu activity in many parts of the country, getting a shot is still a great idea.

Next, some basic hygienic practices can go a long way toward keeping you flu-free. Washing your hands often and using hand sanitizer in a pinch are top ways to avoid the flu, according to the Mayo Clinic. Avoiding contact with sick people, and staying home from work and school when you're sick, can also decrease the flu's spread.

If you or a loved one does contract the flu, then there are plenty of ways to stay safe during the recovery. Staying home and recuperating from the flu is the best course of action for most healthy adults, according to the CDC. If you have the general flu symptoms of coughing, runny nose, and body aches, then it isn't reason to panic. For milder flu illnesses, you don't even need specific medical care or antiviral drugs, as further explained by the CDC.

However, people who fall into high risk groups may need additional precautions if flu symptoms start showing up. The high risk group for the flu includes young children, people over 65, pregnant women, and persons with decreased immune responses, as noted by the CDC. For these people, extra medical care and attention in a good idea. It's all about making sure the flu doesn't become unmanageable.

More Like This
Doctors Swallowed LEGOS To Prove Everything Is Awesome For Kids Who Do The Same
Why Your Vagina May Be Itchy After Sex & What To Do About It
Why Is My Discharge Brown? Experts Explain
Why Is My Vagina Itchy? Experts Explain
What Parents Are Talking About — Delivered Straight To Your Inbox