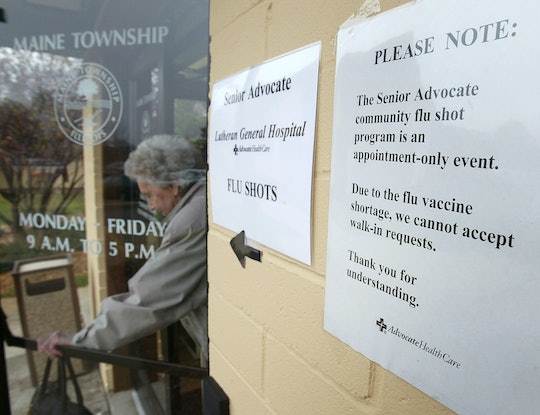 The recent flu season has undoubtedly been one of the worst in decades. Its intensity and voracity have led to thousands of hospitalizations all over the country, and in some cases it has even ended with death. With all the horror stories you have been hearing about the flu, it’s understandable that you are living with a sense of anxiety. But is the flu season slowing down at all? With warm weather, surely the risks of the illness have decreased.

More Like This
Vaccine Shedding Is Not A Thing, Experts Say
15 Face Masks For Kids That Are Cute, Comfortable, & Get The Job Done
When Can Babysitters Get The COVID-19 Vaccine?
Therapist Says: Alone Time For Moms Is A Necessity, Not An Indulgence

The good news is that according to the Centers for Disease Control and Prevention (CDC), the flu season seems to be on the decline with a drop of 0.4 percent since February. In an interview with Romper, Dr. Munir Ahmed, an internist at Emerald Physicians in Cape Cod, Massachusetts, says that while the flu season does seem to be slowing down, it’s hard to predict overall where, when, or how fast it will decline. He says that even though there does seem to be a small drop in flu cases, it doesn’t mean that everyone is fully out of the water yet, because according to the CDC, the flu is still widespread in 26 states with continued high activity in 12 states.

“The Centers for Disease Control still recommends that people get their flu vaccines,” says Ahmed, “and the recommendation will stay in place until May.” He says that along with getting a flu shot, people should continue to take precautions like washing hands, covering coughs and sneezes, and sanitizing surfaces that could be contaminated. People who are immunocompromised, explains Ahmed, like patients with diabetes mellitus, heart disease, cancer, the elderly, or young children, need to do their best to be proactive in their precautions to avoid catching the flu.

With the decline of the flu season and spring right around the corner, if you feel a little sniffly or congested, you may be confused as to whether your symptoms are being caused by simple seasonal allergies or the actual flu virus. In a report by WBDE ABC 15, allergist Dr. Mark Schecker explained that while the flu and allergies share many of the same symptoms, including stuffy nose, cough, sneezing, and congestion, you likely will not get a fever with allergies. He urged that if you are feeling sick, it’s best to get checked out by your doctor who can test you for the flu and give you advice on treatment or medications if needed.

There's a reason why all these medical professionals are taking this flu season so seriously. The predominant strain this year, H3N2, has been known to cause severe complications, noted the Washington Post, especially in young children, the elderly population, and people with chronic health issues. The article explained that the H3N2 strain is particularly hard to combat, partly because it can mutate and change to find its way around your immune system and also because the method used to create vaccines (they are grown in chicken eggs), hasn't been as effective with this particular strain.

But the CDC explains that even though a flu vaccine won’t protect you 100 percent, it can reduce the severity of the flu if you get it, with milder symptoms and less complications. When you get a flu shot, which is designed to protect you from multiple strains of influenza, you develop antibodies that help fight off the viruses, noted the CDC. So even if you get the flu, your body will still have those antibodies to help you fight off the infection.

If you haven't gotten your flu vaccine yet, there’s still time to get one. And even though it seems that the flu is on the decline, you should still keep vigilant about hand hygiene and the spreading of germs. If you or anyone in your family has come down with the flu, the CDC suggested that you keep the sick person home, because going to work or school could contribute to the spread of the virus and end up prolonging the flu season.