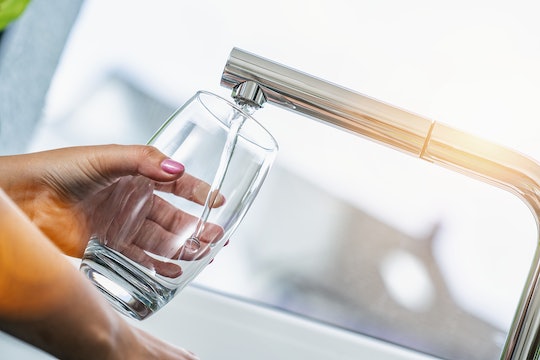 Currently, the U.S. Centers for Disease Control and Prevention (CDC) recognizes community water fluoridation as one of the 10 great public health achievements of the 20th century. But is fluoride safe to consume during pregnancy? A controversial new study has raised questions and stirred debate around the topic of maternal exposure to fluoride in pregnancy.

A new study recently published in JAMA Pediatrics claims to have found a potential link between maternal exposure to fluoride while pregnant and lower IQ scores in toddler-age children, especially boys. The study tracked the fluoride exposure of mothers spread across six cities in Canada through urine samples and self-reported data. While researchers measured the average concentration of fluoride in urine samples taken throughout the mothers' pregnancies, they also estimated daily fluoride intake based on participants' self-reported intake of tap water and water-based beverages like coffee and tea.

However, it should be noted that while 601 mother-child pairs were recruited, full data sets couldn't be collected for every pair. As the study noted, urinary tests were gathered from 512 of the 601 mothers while self-reported beverage intake data was available from 400 of them. It's also worth noting that even women reported to live outside of areas where fluoride was added to tap water still had fluoride in their urine. According to the study, the average urinary fluoride level for women living in cities that did not have fluoridated water was 0.4 milligrams per liter compared to 0.69 milligrams per liter for women living in areas with fluoridated water.

Finally, to determine the early childhood IQ scores of participants' children, researchers administered IQ tests some three to four years after birth using the third edition of the Wechsler Preschool and Primary Scale of Intelligence. The study's authors argue that their findings found "fluoride exposure during pregnancy was associated with lower IQ scores in children aged 3 to 4 years." However, they note those results seemed to be largely limited to male children.

When comparing children's IQ scores to the estimated daily fluoride intake determined from participants' self-reported data, researchers found that a 1 milligram per liter increase in fluoride was associated with a 3.7 point drop in IQ scores for both male and female children.

Additionally, in an opinion provided to London's Science Media Centre, Dr. Oliver Jones, associate professor of analytical chemistry at RMIT University in Australia, urged people to keep in mind a few factors when reading the study. "The key words in the paper are 'higher levels,"' he said. "The authors state that an increase of 1 milligram per liter increase in fluoride was associated with a 4.49 point lower IQ score but fluoride intake appears to have been below 1 milligram per liter for most people in the study, even for those with fluoridated water, and nearly everyone (bar a few outliers) had a fluoride intake of less than 2 milligram per liter (which multiple previous studies have shown is safe)." Jones also argued there are "a number of potential confounding factors" in the study, "including the fact that the water intake was self-reported and, as the authors admit, some of the methods used are not validated."

Statistical Ambassador at the Royal Statistical Society, Dr. Joy Leahy, also cautioned that the nature of the study could have been marred by children's exposure to fluoride after birth. "This study aimed to specifically assess the impact of maternal fluoride exposure during pregnancy and IQ scores in offspring," Leahy told London's Science Media Centre. "However, we should expect that fluoride exposure during pregnancy will be strongly associated with fluoride exposure in children after birth. For example, if a woman is living in an area with fluoridated water during pregnancy, then her child is likely to grow up drinking this same fluoridated water. Therefore, it is difficult to say whether any association found is driven by the fluoride consumption in pregnancy, or an assumed fluoride consumption in the infant after birth."

But while this latest study has drawn some critics, many agree that more research into the topic is needed. "Scientific inquiry is an iterative process," JAMA Pediatrics editor Dr. Dimitri Christakis said in an editorial comment published alongside the study. "It is rare that a single study provides definitive evidence. This study is neither the first, nor will it be the last, to test the association between prenatal fluoride exposure and cognitive development."

In a statement commenting on the study, the American Dental Association also welcomed further research into the topic of maternal exposure to fluoride in pregnancy "to see if the findings can be replicated with methods that demonstrate more conclusive evidence." The ADA also stressed that "more than 70 years of research and practical experience, the overwhelming weight of credible scientific evidence has consistently indicated that fluoridation of community water supplies is safe." What's more, the organization said they remained committed to fluoridation of public water supplies as "the single most effective public health measure to help prevent tooth decay."

While a single study shouldn't lead to major changes in public health policy, concerned mothers-to-be can attempt to limit their exposure to fluoride by opting to drink bottled water that is either fluoride free or lower in fluoride instead of tap. And, as always, consult with a trusted medical professional for further guidance.

More Like This
Yes, It’s Possible To Get Pregnant If You Have An IUD
7 Things Pregnancy Dreams Can Mean If You're Not Pregnant
Here’s What It Means If You Give Birth During A Solar Eclipse
You'll Feel Like A Princess In These Gorgeous New Year's Eve Maternity Dresses