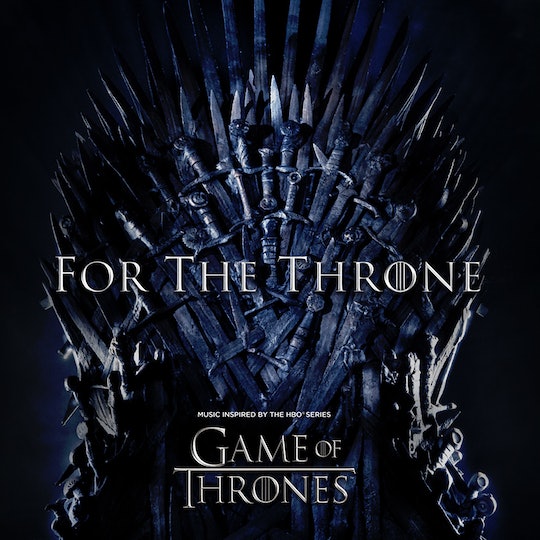 With the beginning of the end just days away (the first episode of the final season of Game of Thrones, that is), we're all coming up with different ways to commemorate the end of an era. Whether it's GoT inspired cookies, or hey, a cover album of music inspired by the show and performed by your favorite artists of all time, GoT fans are kind of here for it regardless. As for whether or not For The Throne album is on Spotify? Well, we'll just have to wait and see.

Columbia Records and HBO announced on Tuesday that a team of your favorite artists, including Mumford & Sons and A$AP Rocky, have come together to create an album of songs inspired by GoT. So yes, that means imagining your favorite artists singing tunes in the medieval, gothic, war-anthem style of Westeros.

It probably goes without saying, but it's definitely going to be epic. As for whether or not it will be available on popular streaming services, like Spotify? We'll have to wait and see. The official press material didn't disclose, though we do know that the album will be available for purchase on April 26. This doesn't guarantee a streaming agreement, but it seems likely.

However, this wasn't the first time word of an epic final season soundtrack made rounds. In fact, Yahoo! reported that some had said The Weeknd, Travis Scott, and SZA were teaming up for a song together for the show's final season. It's possible, given that they're in the lineup of artists featured. But all of them together? It's a power trio, for sure.

Here's the full list of artists featured on the album:

Though there hasn't been confirmation yet as to whether or not the album will be streamed, we do know that it will be released not only for purchase digitally, but also as — you guessed it — a vinyl record. It's perfect for the vintage-loving, GoT fan in your life as they mourn the loss of their favorite TV show of all time.

As the final episodes of GoT inch closer, the cast has begun to say their goodbyes, as Mashable reported. Emilia Clark, who plays Daenerys Targaryen (a.k.a. Khaleesi, a.k.a. the Mother of Dragons, Breaker of Chains, etc.) posted an Instagram photo of her laying in a bed of flowers on an island that is likely somewhere in Belfast, Vanity Fair reported, where a lot of the show was filmed.

"Hopped on a boat to an island to say goodbye to the land that has been my home away from home for almost a decade,” she wrote. “It’s been a trip @gameofthrones thank you for the life I never dreamed I’d be able to live and the family I’ll never stop missing #lastseasonitis.”

The show's series finale will take place on May 19, according to TIME, but the first episode of the season will premiere in just a few days, on April 14. Fans are understandably waiting on the edge of their seats to see who will take the Iron Throne once and for all, and how the series will ultimately come to an end. Though the show was based on a book series, it's safe to say they won't be concluding exactly as the novels did. Because where's the fun in that? Sometime in between, we can look forward to new GoT inspired tunes, too. It's a bittersweet two months coming up.