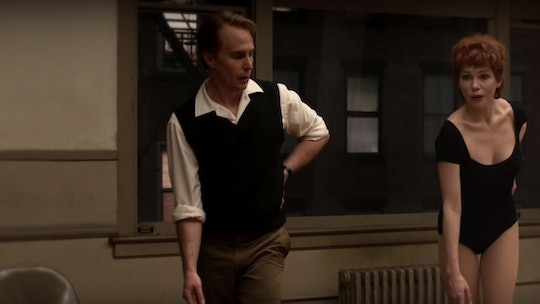 You don't have to be a Broadway enthusiast to appreciate the genius work Bob Fosse and Gwen Verdon did in the '60s, '70s, and '80s. But it wouldn't hurt to take a crash course on their influence in the industry before you start the limited series based on their life together tonight on FX. Because of the raw way their story is depicted, viewers are going to wonder if Fosse/Verdon is based on a true story and since the Sam Wasson’s biography Fosse was used as inspiration for the miniseries, that makes the story all the more compelling.

Fosse was *the* Broadway director and choreographer of his time who arguably influenced big movie directors of today. His partner in show business and, soon after, in life, Gwen Verdon, was a talented performer and together, they had a famous affair and marriage that has now laid the groundwork work for Fosse/Verdon, the latest real life-inspired limited series ordered by FX.

But just in case there are concerns about taking liberties with the couple's story or their professional careers before and after they met each other, their daughter, actress and dancer Nicole Fosse, serves as co-executive producer on Fosse/Verdon to ensure that the story is told truthfully and with taste. But you definitely don't have to have seen movies like Cabaret (directed by Bob Fosse, by the way) to appreciate their talent and their love story.

"My mother and father have one of the greatest love stories ever known," Nicole Fosse told Deadline. "They were extremely complex people with an indestructible bond, loyalty, and trust that endured both fantasy and reality. Finally, we have a creative team with the talent and wisdom to tell the story."

Sam Rockwell, who recently knocked it out of the park as George W. Bush with the Dick Cheney biopic,Vice, plays Fosse opposite Michelle Williams, who recently appeared in Venom and The Greatest Showman, and now takes on the important role of Gwen Verdon. Both actors have such a wide range of talents and have dipped their toes in so many genres, I have no doubt that they have what it takes to play the famous performing couple.

Fosse might be most well known for directing Pippin on Broadway in 1973, for which he won a Tony Award, and Chicago in 1976, which earned him three nominations. He also won an Academy Award for directing the movie Cabaret in 1973 and was nominated for Best Director for his work on Lenny in 1975.

Verdon had her own success both before and after she met Bob Fosse. She was considered to be one of the best Broadway dancers of her time and had a career that included acting, dancing, and choreographing credits. She was in stage productions of Chicago and Sweet Charity, both of which earned her Tony Award nominations, but that doesn't even begin to scratch the surface of her career. Throughout the years she also appeared in TV and film and kept working up until her death in 2000.

Fosse and Verdon were known for having a passionate relationship, both professionally and personally, and that will likely spill into Fosse/Verdon. But because it wasn't always easy for the pair to work together, sometimes with Verdon under his shadow, their relationship wasn't always easy and, Nicole Fosse told Entertainment Tonight, it was important to her that her mother's story was also told through the limited series.

"I think [Fosse/Verdon] brings a lot of light onto my mother, which is long overdue," she explained. "She was in the shadow of my father for a long time. She was not the director, she was not the choreographer, although she contributed behind the scenes an incredible amount. So, I'm very happy that she's really being brought forth into the public eye."

Fosse/Verdone premieres on FX tonight at 10 p.m. ET with the first of a 10-episode limited series that is sure to do the couple's story justice.