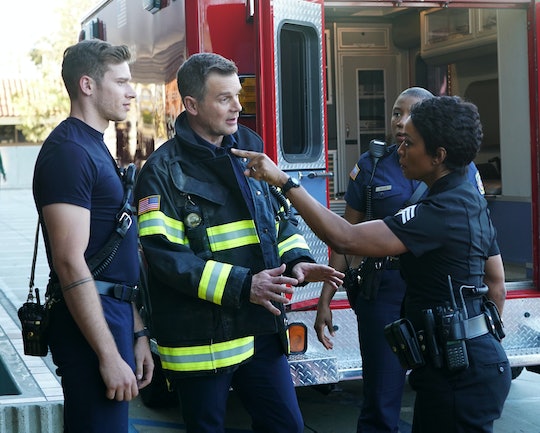 From the creative team that brought you Glee, American Horror Story, Niptuck, and more comes a new show about first responders. The new procedural drama, titled 9-1-1, premieres on Jan. 3 on FOX, which will probably leave some of you wondering if FOX's 9-1-1 is based on true events. Some of the show's stories may sound familiar.

The show, which was created by Ryan Murphy and Brad Falchuk, is based on "the real-life, high-pressure experiences of emergency response providers," according to the show's website. However, if the show draws from specific true events, that remains to be seen. One thing is clear though, the show looks really good.

For Athena, it appears like she'll face marital problems as well as being an awesome mom to her daughter. It looks like Abby is taking care of someone, possibly her mother, who appears to be very ill. Bobby seems to be struggling with sobriety, but he also seems to be getting help, both from a priest and his fellow first responders.

Additionally, it's clear all three of these characters' stories will overlap in some way. For Athena and Bobby, it doesn't look like their interactions go well, based on the photos released from the pilot episode. It's uncertain what exactly goes on, but it doesn't look to be anything good. It's hard to say who takes seniority in emergency situations like these, so it's easy to see why Athena and Bobby could end up butting heads.

Similarly, it wouldn't be surprising if Abby's desire to know what happens to the people she helps leads her to direct contact with Athena or Bobby or both. She may even realize that operating the phones isn't enough for her and she may decide to become a first responder herself. There's a lot that could happen on the show and Murphy and Falchuk definitely have a lot to work with here, with such an incredible cast.

The series will also include Oliver Star (Into The Badlands), Aisha Hinds (Shots Fired), Kenneth Choi (The People v. OJ Simpson: American Crime Story), and Rockmond Dunbar (Prison Break) in series regular roles. Although Murphy has a slew of other shows in the works at the moment, 9-1-1 marks his return to network TV following the cancellation of Scream Queens last year. His other shows, American Horror Story and American Crime Story, both air on FOX's cable network, FX.

Similar to other cop dramas, there will most likely be a new "case" each episode, giving viewers insight into how different emergency situations are handled. This could also allow the series to bring in interesting guest stars to the showcase over the course of the first season.

Hopefully this is only the beginning for this show, as it certainly seems interesting, but it hasn't yet been renewed for a second season, though that's not too surprising since it doesn't premiere until tonight. Still, I wouldn't be shocked if it got renewed pretty quickly.