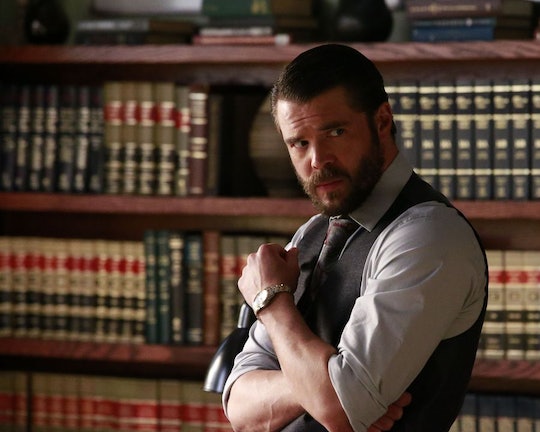 Is Frank Dead On 'How To Get Away With Murder'? Don't Say Goodbye To Him Yet

On the Season 2 finale of How To Get Away With Murder, fans were treated to Frank's softer side, and finally began to see the toll his rather bloody position as Annalise's henchman takes on him. But, a couple of breakdowns later (which include real tears shed!), he disappears. Even when Laurel goes to look for him in the final moments of the episode, he's nowhere to be found, which begs the question: is Frank dead on How to Get Away with Murder?

First, it might be useful to revisit why Frank has gone missing. It comes out during the season finale that the car crash which prompted the stillbirth of Annalise's baby ten years ago was no accident: it was a hit by Charles Mahoney set in motion by intel he gathered from a bug which Frank placed in Annalise's hotel room. But, why would Frank betray his boss like that? For the money, of course. Mahoney (via a persuasive seductress) offered a young Frank a duffel-full of cash to do the deed, and it comes right after he and Annalise have a big blow out. Early on in their working relationship, Frank hasn't yet grown attached to Annalise, and he feels unappreciated, overworked, and broke. Unfortunately, he never imagined that planting the bug would lead to someone making an attempt on Annalise's life, and ultimately killing her unborn baby. In a fit of regret, he confesses to Sam, who forbids him from ever telling Annalise.

But, back in the present day, Annalise finds out anyway, after which she promptly tells Bonnie that Frank "needs to go." In the moment, it sounds like she just means that Frank needs to get fired and literally never show his face in Keating manor ever again. But could she mean something more — gulp! — sinister?

Meanwhile, Laurel ransacks his apartment, and after a couple of very stressful moments in which it could be revealed that Frank killed himself (like when she hesitantly checked the bathroom and closet for his body), it turns out he's nowhere to be found. Even actor Charlie Weber, who plays Frank, got scared for a second that he would meet a dark fate. He told Variety:

"They did a brilliant job setting that up. I knew at the time that I was not dead, but at the time, my heart was racing. I was like, 'Oh my god, maybe they lied to me!' It’s intense. You just don’t know what you’re going to see."

Right after that, a mystery shooter takes out Charles Mahoney about five inches from Wes' face, and Frank is literally dripping with motive, though we can't see who did it. Is this Frank's way of coping with his guilt? Doing Annalise "a favor" after essentially being responsible for the death of her child? Proving his worth to her to get back in her good graces?

In any case, Weber is basically certain he's returning next season, so it seems like Frank at least got out of Philly before Annalise put a hit on him. Although, we'll have to wait until next season to find out where he went.