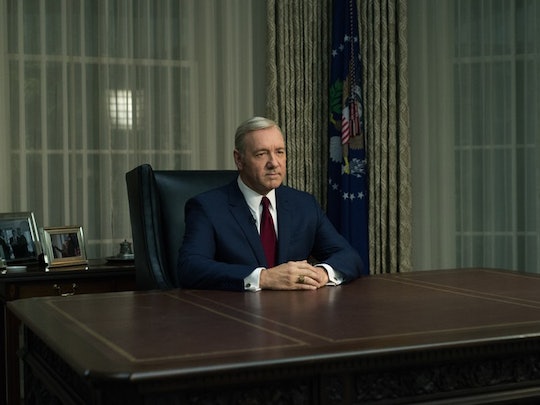 It’s been more than a year since we last heard news from the real presidential race of 2016: the campaign to reelect President Frank Underwood. Like millions of fans of the popular Netflix series House of Cards, I’ve been waiting patiently for answers to the most pressing cliffhangers from the February 2015 debut of Season 3: Is Frank Underwood still President? Is Claire Underwood still First Lady? Will Doug Stamper have to kill anyone else to protect the Underwood presidency? In less than 24 hours, Netflix will release House of Cards Season 4, and, hopefully, answer all of our lingering questions.

With so many months since the last 13 episodes left off, it’s perfectly understandable that some may need a reminder of how things ended. But on the key question of whether House of Cards’ lead character and modern-day Machiavelli Frank Underwood, played brilliantly by actor Kevin Spacey, is still seated in the Oval Office, the answer is simply: for now.

Underwood’s ascension has been a thing of evil, amoral beauty to watch: he was completely cutthroat, totally self-serving, and utterly ruthless. In the first 39 episodes, Underwood orchestrated a series of schemes and double-deals that catapulted him from the arguably comfy spot of House Majority Whip to the White House as vice president. “One heartbeat away from the presidency and not a vote cast in my name. Democracy is so overrated,” as Underwood said in Season 2’s “Democracy is Dead.”

Once he landed in the White House, Underwood lied, cheated, and murdered his way to the Oval Office, ousting his predecessor, President Walker, along the way. But in season three, it became clear that Underwood would actually have to persuade American voters to send him to the White House for a second term. So while Underwood was indeed president when last we saw him, the big question in season four will be whether he can hold on to the office.

The primaries are going to be tough for Underwood this season, as Entertainment Weekly reported in an early (spoiler-free) review of House of Cards Season 4. And while Underwood’s bullying, brashness, and single-minded narcissism might feel eerily familiar for those following the real-life primary season, that’s as far as the similarities will go. According to EW, Underwood will continue to be the cold and calculating Southern gentleman we’ve come to know. But what’s still unclear is whether his trusted advisor, co-conspirator, (and wife) Claire Underwood will stay by his side this season. EW reported that the evolution of their partnership/marriage will be a key focus for the coming episodes.

With its complicated web of foes, allies, and manipulations, House of Cards in its first three seasons felt more like a Shakespearean tragedy than a typical political drama. On the small screen, it feels perfectly acceptable to have someone so hollow, so evil, sitting in the most powerful position in the country. No matter how messy things get, it’s clear that Frank Underwood is in command — and it’s easy to root for him to claw and bite his way into power. Thank goodness things are only going to get more messy for the Underwoods in Season 4, because I need the world of politics to make sense again. And thank goodness Netflix already announced House of Cards Season 5, or this is one election I’d really be biting my nails over.