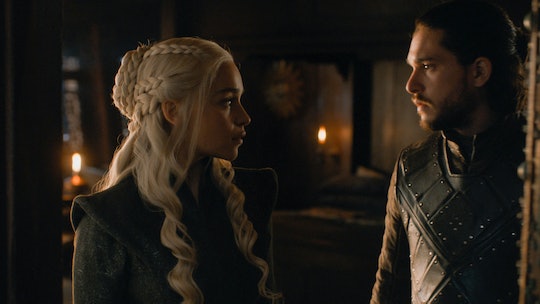 'Game Of Thrones' Set To Return For 2018 Emmys Season

Last year it may have felt like something was missing from the Emmys. For Game of Thrones fans, it was definitely the lack of nominations for the hit HBO series. However, this wasn't a massive snub; Game of Thrones was just ineligible last year, with it's seventh season falling outside of the eligibility period for the 2017 Emmys. This has left many to wonder, is Game of Thrones eligible for the Emmys this year?

Thankfully, it is. The seventh season aired last summer, putting it right at the start of the eligibility period for this year's Emmys. Thus, fans should expect to see the series gather a large number of nominations as it has since 2011. To date, Game of Thrones is the most-awarded scripted series in the history of the Emmys, and it's always been the show to beat in the Drama categories. Overall, Game of Thrones has earned 106 nominations and 38 Emmy wins, and there's no doubt this number will only grow with the 2018 Emmy nominations on Thursday, July 12. However, though GOT will definitely still get the nominations, they're no longer guaranteed to win.

While Game of Thrones had to sit out last year, The Handmaid's Tale stepped in and swept the Emmys. Not only did the show win Outstanding Drama Series, which had been won by Game of Thrones in both 2015 and 2016, but Elisabeth Moss won Lead Actress, Ann Dowd won Supporting Actress, and Bruce Miller won for Writing. Alexis Bledel also won for Guest Actress in a Drama Series. In total, The Handmaid's Tale got 13 nominations and won eight Emmys.

This year, however, the two shows will undoubtedly be facing off in a multitude of categories, including Outstanding Drama Series, and it'll be interesting to see who walks away with the award this time. Both shows are incredible; it's why they've won in the past. But they're also vastly different. Game of Thrones is fantasy, based on the bestselling novels by George R.R. Martin, and follow a plethora of families fighting for the Iron Throne.

Much differently, The Handmaid's Tale is based on the classic dystopian novel of the same name by Margaret Atwood, and has been hailed as a feminist show that shows a dark future for America that doesn't feel all that far away — making it even more terrifying to watch. Though one could argue the two shows have overarching themes dealing with power, religion, and politics, for the most part they are quite different. Thus, it'll be interesting to see which of the two shows the Academy favors.

Along with Game of Thrones and The Handmaid's Tale, another top contender in the Drama category is BBC's new series, Killing Eve, which stars Grey's Anatomy alum Sandra Oh. Oh received five Emmy nominations while on Grey's and fans are hoping she'll get the nom and the win this year for her role on Killing Eve. NBC's heartfelt drama, This Is Us, is also expected to walk away with at least a few noms, and many fans are hoping Mandy Moore will finally get her first Emmy nomination.

HBO will most likely have another contender in the Drama category with the sci-fi drama Westworld, which just made it into the Emmys eligibility period with the start of its second season. This will also be the first time HBO's two biggest series at the moment go head to head, since Westworld only just made it to the Emmys last year with its first season.

Thus, there's plenty to look forward to with this year's nominations as well as the actual awards ceremony. There are several heavy hitters this year and it's anyone's guess who will win.