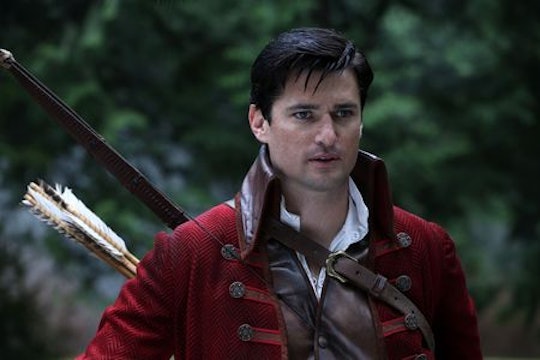 Is Gaston Good Or Bad On 'Once Upon A Time'? It Depends On Your Point Of View

Of all the love stories on Once Upon a Time (and there are a lot), Belle’s romantic travails are probably the most frustrating. For a character most often defined by her bookishness and smarts, Belle certainly appears to have a tough time making an good decisions about men. And then Once Upon a Time introduced Gaston — yes, that Gaston — and it made even more sense.

In the first flashback, when Gaston and Belle meet, Gaston admires Belle for what he’s heard of her, that she is a lovely and intelligent woman. Woah there! That’s not the Gaston we know, at least not from Disney’s Beauty and the Beast. We’re more familiar with what Belle tells her father she’s heard of Gaston, a famously successful hunter of animals and women. So what’s the verdict? Is Gaston still a vain, womanizing, angry-mob-herding creep? Or is he actually a decent guy? Belle seems eager to believe the best in him, but Belle doesn’t have the best track record as a judge of character. This lady fell in love with The Dark One, after all.

Still, we seem to be witnessing some pretty sweet moments between the two of them. On their romantic walk through the woods (woods are everywhere around here), the pair comes across a baby ogre in a hole in the ground. Gaston, believing the ogre to be dangerous, wants to kill it. But Belle is not so sure, and decides that they should (of course) do some research in the library before making any rash moves. Looking over a particularly large book, Gaston tells her, “I have a feeling, I’ve finally found a woman of substance.”

But the sly smile on his face as she leaves hints at the darkness we’ve been waiting to see in him. In the present day, in the Underworld, Hades enlists Gaston (who hilariously now works in the animal shelter) to kill Rumplestiltskin, a deal he eagerly accepts. After all, predictably enough, Gaston is in the Underworld because Rumple killed him. After finding the book she gave him in his locker at work, Belle believes Gaston’s unfinished business is her. Gaston is good! But when she confronts him after he tries to fulfill his deal with Hades and kill Rumplestiltskin, he flips out on her. He shouts that he still has the book because it reminds him of his own weakness in following her advice and not trying to kill Rumple immediately. Gaston is bad!

In the end, much like Rumplestiltskin, Gaston is both bad and good, but perhaps mostly bad, not that that matters to Belle. Rumple tries to teach Belle a little about moral ambiguity, claiming that the difference between dark and light magic is mostly about point of view. This aligns nicely with Belle's view of men, that they can be both bad and good, but she chooses to view them as good, even when confronted with obviously bad behavior.