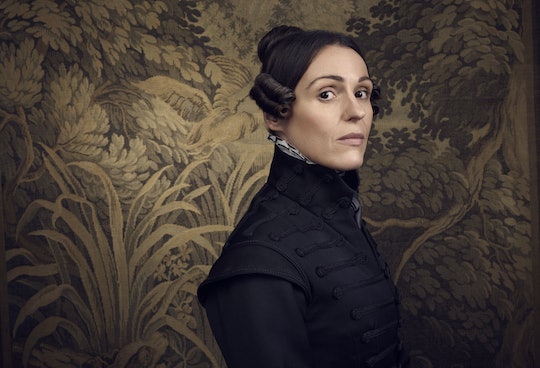 Anne Lister Is Honestly Way Too Cool To Be Believed

HBO's Gentleman Jack looks almost too good to be true: a turn of the century queer woman flouts societal conventions while rocking a debonair top hat? How exactly did HBO gain access to the inside of my head and fulfill all my deepest dreams? What makes the whole thing even better is that Gentleman Jack is based on the true story of Anne Lister, whose diaries provided the world with a rare account of a gay woman's everyday life in the 1800s. After they cracked the secret code she wrote in, that is.

Anne Lister, both on the HBO series and in real life, was an English landowner living in West Yorkshire. But she was so much more than that. Deemed "the first modern lesbian," according to AnneLister.co.uk, she lived an incredible life, made more incredible by the fact that she was able to stay true to herself while she did it. Being a woman of means with her own land gave Lister a certain amount of freedom, which allowed her to dress how she liked, abandoning feminine styles of the time for her preferred all black ensembles.

She wrote diaries for most of her life, leaving behind a treasure trove of over four million words. One sixth of those journals was written in a code Lister came up with herself. She blended algebra with the Greek alphabet so that she could write freely about her numerous affairs with women — something that wasn't discovered and decoded until decades after her death.

According to Marie Claire, Lister inherited her family home Shibdin Hall (and its 400 acres of land) in 1826. Though wealthy women were often prevented from taking part in most work, Lister was an active participant in the running of Shibdin Hall. She collected rent and tolls on top of making money from the land's wood, coal, and shared canals. When she wasn't being a boss, she was traveling and breaking boundaries in other ways. Series creator Sally Wainwright told Collider that Lister made the first recorded ascent of Mt. Vignemale in the Pyrenees. You know, just casually climbing mountains to blow off some steam after running an entire estate.

Lister also essentially married the woman she loved, long before it was legal to do so. Lister and Ann Walker may not have received a marriage certificate, but they did make vows to one another and exchange rings. Per AnneLister.co.uk, they took sacrament together at the Holy Trinity Church in York, too. As Lister biographer Helena Whitbread told the Guardian, to Lister, that meant they had "sealed the matrimonial pact in which they had entered."

Lister and Walker remained together until Lister's death five years later, at age 49. She had been bitten by an insect while traveling in Georgia, which led to fever and her eventual demise. Her diaries weren't discovered until 50 years later, when a descendant of hers named John Lister realized what was written in them and chose to keep them concealed. They returned to hiding for another hundred years or so, with their code finally being broken in the 1980s. It took a few centuries, but now Anne Lister's story is finally being told.