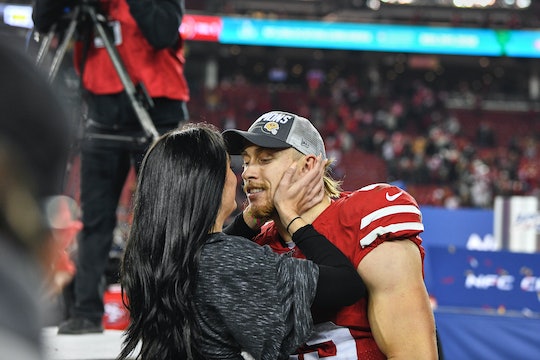 I hate to be the bearer of bad news, but San Francisco 49ers tight end George Kittle is indeed married. The 26-year-old NFL star's lovely wife Claire has been by Kittle's side for years now and is often seen at games, so she will surely be in Miami cheering on her hubby when he plays in Super Bowl LIV against the Kansas City Chiefs on Sunday, Feb. 2.

Kittle married his college sweetheart in April 2019 in a low-key ceremony, surrounded by those closest to them. Claire detailed their decision to keep things small in a post on her blog, Lettey Set Go. "We knew we wanted a quaint, small, intimate ceremony with only our immediate family because that's the sacred part of it all," she wrote.

The couple — who Claire described on her blog as "crazy" and "fly by the seat of our pants with every decision we make" — chose to get married in an Iowa City, Iowa jewelry store before football season began last year. And instead of wearing an elaborate wedding dress at their ceremony, Claire wore a chic white jumpsuit she purchased from the mall at Dillards.

George first met Claire while attending the University of Iowa together where they were both freshman athletes (Claire played basketball there at the time). George apparently spent eight months in the "friend zone" before they started dating, and they have been together ever since. You can hear George explain all of this in their very sweet engagement video, which made me shed a few tears.

When Claire isn't cheering her husband on from the sidelines, she is writing on her blog, Lettey Set Go, where she documents her travels across the world and gives some pretty great traveling tips. The blog dates back to 2017, so fans can get a taste for what Claire and George's life together was like before he became the NFL star he is today. Claire has also modeled in the past and even competed in a fitness competition.

Once football season is over, the couple is celebrating their marriage this summer with their family and friends in a big wedding ceremony in Italy, according to Claire's blog. It's very possible that George will be sporting another ring (ahem, a Super Bowl ring) in addition to his wedding band for this big day. Of course, that will be decided at Super Bowl LIV. Win or lose, though, it's clear he's got a super strong support system behind him.