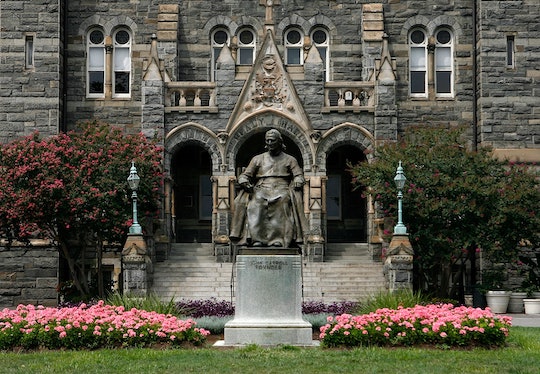 Is Georgetown Breaking The Law With Its Slave Descendants Admissions Policy? It's Legal

Georgetown University announced on Wednesday that in order to make up for profiting off of the sale and labor of slaves in the 18th and 19th centuries, it would be making a series of changes, including erecting a memorial, renaming two buildings, and offering preferential admission status to the descendants of the 272 slaves the university sold in 1838. This has some people cheering, and others wondering if Georgetown's new slave descendants policy is even legal. The short answer: Yes, it is, and also, it's pretty rude to even question it, honestly.

Admissions preferences are nothing new, and I'm not just talking about affirmative action. Many American universities (Georgetown included) give preferential status to "legacies," or the descendants of alumni, a practice that mostly benefits wealthy, white students. And then of course there are the college athletes who are recruited, although one could argue that they're not exactly being treated fairly, since they basically work for the schools for free. But yes, colleges and universities give different groups preference all the time, for a variety of reasons, and this right here? This is a very good reason to give preference. The New York Times reported that those slaves, in today's dollars, netted the school $3.3 million, so karma aside, they owe the heirs plenty.

Some argue that admissions preference – specially racial preference – violates the Fourteenth Amendment's Equal Protection Clause and/or Title VI of the Civil Rights Act of 1964, which prohibits "discrimination under federally assisted programs on ground of race, color, or national origin." While private universities aren't technically federally funded, they do benefit from tax exemptions, and they receive grants; in 2010, Georgetown received $5.6 million in Title VI funding from the Department of Education to fund fellowships. Does that qualify them as being "federally assisted"? I'm not a lawyer, and far more educated people than I have been debating the issue of preferential university admissions for decades without result.

But whether or not giving the descendants of Georgetown's slaves admission preference violates the letter of the laws, surely we can all agree that it's in keeping with the spirit of the laws, which were meant to protect black Americans, not whiny white Americans who were born on second base and act like they hit a double (the majority of the Supreme Court agrees with me on this matter, for what it's worth). As President Lyndon B. Johnson said in his 1965 commencement address at Howard University, "You do not take a person who, for years, has been hobbled by chains and liberate him, bring him up to the starting line of a race and then say, 'you are free to compete with all the others,' and still justly believe that you have been completely fair."