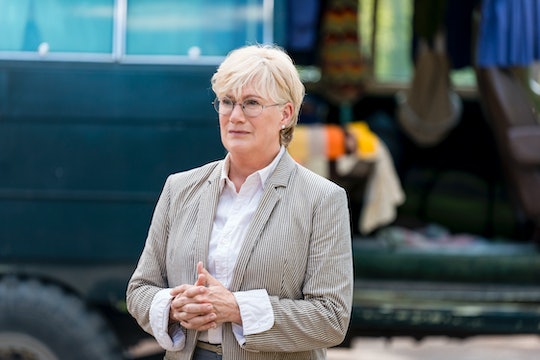 In "The Key," The Walking Dead introduced a new character who may prove to be an important ally in the dark days to come. Georgie is a character of unknown origins who nevertheless couldn't appear farther from the world the main ensemble inhabits. But could the source material provide any information about where she comes from? Is Georgie in The Walking Dead comics?

It doesn't seem as though there is a character named Georgie who matches the character fans were introduced to in Season 8, but that doesn't mean the comics don't have any insight at all. Georgie did have some clear defining qualities: she was cleanly dressed, rocking a distinctly dust-free blazer, and she traveled with guards in a stocked van. She extended a friendly hand to Maggie, offering her help in exchange for records. She even passed along some handy plans that could aid in expanding the communities and setting up a more solid society.

In The Walking Dead comics, there is a community called the Commonwealth — and Georgie might be the show's way of bringing them into the fold. There could be some page-to-screen adaptation discrepancies, but there are just enough similarities between Georgie and the Commonwealth's leader that they might be one and the same.

It doesn't seem like Georgie has struggled in the same way the main characters on the show have, and if she is part of the Commonwealth then that could explain way. Actress Jayne Atkinson spoke with ComicBook.com, and said, "Wherever she's from and however things happened, she has not been touched physically in the way that everyone else has. So I wouldn't say psychologically she hasn't, but, however, she has come out of this more than just surviving."

That could also describe a character in the comics named Pamela Milton, who functions as the Commonwealth's leader. Atkinson insisted that she didn't know Georgie's backstory so there would be no way to tell if she really matches up with Pamela, but the groundwork does seem to be there. The Commonwealth is a successful community of almost fifty thousand survivors and they have managed to rebuild something similar to the world that existed before the apocalypse.

According to The Hollywood Reporter, the Commonwealth is set up in Ohio, which is a fair distance from Alexandria, Hilltop, and the Kingdom. Despite how idyllic it might seem there, there is some unrest; a soldier named George is apparently involved in a scheme to overthrow the Commonwealth's current ruling system. Perhaps Georgie is a gender-flipped nod to that character, or perhaps George has been combined into Pamela Milton to create someone new. The show does adjust and combine things from time to time, which keeps the audience guessing.

It's hard to confirm anything without more information; after all, Georgie has only made one appearance so far, and she didn't get a chance to divulge much of her history in the process. There are more pressing matters to deal with than the possibility of an advanced society who wants to be friends, but having an ally like Georgie could be useful going forward. A war with Negan seems like a sure thing, but the aftermath is just as important. Everyone will need to figure out how to pick themselves up and continue on yet again. If Georgie is as actually as kind as she seems, then there could be the promise of a better future with her assistance.

Without a few more identifying details to go off of, Georgie remains a mystery. However, it's impossible to ignore the connection that might exist between her and the Commonwealth, hinting at Walking Dead comic storylines that might be adapted on the show in later seasons.