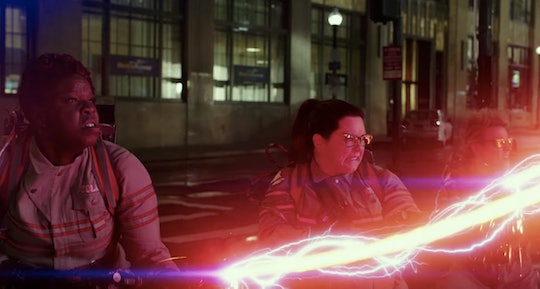 Is 'Ghostbusters' Appropriate For Kids Under 5? Only If They're Ready To Face Scary Ghosts

No matter what you might think about the new Ghostbusters all-lady reboot coming to theaters this Friday, the fact of the matter is that heading out to the movies to cool off and keep the kiddos entertained for a couple of hours is practically a requirement for parents in the summer. For your especially little ones, is Ghostbusters appropriate for kids under 5 years old?

Ghostbusters has been rated PG-13 by the Motion Picture Association of America, specifically for "supernatural action and some crude humor." Like most MPAA ratings, its brief rating rationale doesn't really get into much detail, there are plenty of reviewers and critics who've checked out the film before its Friday premiere — and the consensus seems to be that Ghostbusters might just be a little bit too scary for young kids. But what about the rating itself? It's important to remember too, what the PG-13 rating means: Parental guidance is suggested and parents are strongly cautioned, as some material may not be suitable for children under 13 years of age.

As hammy and hunky-dory as this new take on Ghostbusters might be, you might want to leave your very littlest ones at home for this movie.

Obviously the big topic of concern for parents of little ones is right there in the title: Ghosts. While Ghostbusters brings back the lovable but disgusting Slimer, there are lots of rather scary ghosts in the lineup, too. Consider this terrifying ghost who shows up early in the film:

Would your 5-year-old be cool with that? Hell, I don't even know if I'm cool with it and I'm in my 30s. And this ghost isn't some one-off baddie, either. Director Paul Feig told IGN:

Several of our ghosts are murderers and bad people who have a very strong energy that was negative that they’ve brought back... Then there’s another ghost they meet in the subway that’s a guy that was electrocuted in the electric chair and who is clearly, like a murderer.

Yikes. I'm not sure if I would be okay with trying to explain any of that to a 5-year-old, let alone letting him or her actually watch scenes with these ghosts. Again, I'm not so confident I would want to see those scenes, either — but, in full disclosure, I'm the person who had a straight up panic attack in the pre-ride room of The Haunted Mansion at Walt Disney World... when I was 10. (Don't judge.)

But it isn't all ghosts and ghouls that parents should be wary of: According to the Canadian website Parent Previews, Ghostbusters shows a depiction of a suicide, as well as some mild sexual references. In all likelihood, these references will probably fly right over your 5-year-old's head, but you'd be surprised what questions you might have to answer in the car ride home. Kids can be shockingly observant. Common Sense Media also reports that both "sh*t" and "damn" are used, albeit infrequently, in the film, and there's some alcohol use by adults.

For one last parental check, take a look at the Ghostbusters international trailer, which features some of the scarier moments from the film:

So, what's the verdict? Preston Burt at GeekDad.com had this to say about Ghostbusters's appropriateness for kids under 5: "I plan on taking my 11-year-old daughter to see the movie soon after the wide release, but will leave my 7-year-old at home." Your 5-year-old might be way more mature than most other 5-year-olds his or her age; or they might be freaked out by just looking at any of the GIFs on this screen.

Ultimately, it's up to you whether you think Ghostbusters would be OK for your littlest kids. Just remember that if you do decide to let your 5-year-old go see Ghostbusters, you might want have a chat with them about fantasy and reality first.