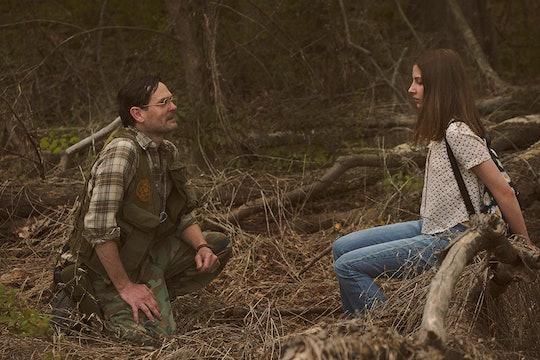 In the trailer for Lifetime's Girl in the Bunker, a young teenager is approached by a strange man in the woods. He handcuffs her, then leads her into an underground hideout where she is chained up, threatened, and assaulted. It's a nightmarish scenario made even more unsettling by the fact that Girl in the Bunker is based on a true story. It tells the harrowing tale of what happened to 14-year-old Elizabeth Shoaf at the hands of her abductor, Vinson Filyaw.

On September 5, 2006, Shoaf was heading home from school in Lugoff, South Carolina when she crossed paths with Filyaw. He claimed he was a police officer and she was under arrest for possession of marijuana, but the situation was strange from the start. He was wearing fatigues, not a uniform, and in addition to the cuffs, he put a strange device around her neck that he claimed was a bomb. Then he walked her into the woods until they arrived at his booby-trapped bunker, where Shoaf was held for ten days. She endured horrific abuse and rape but survived to tell her story by strategizing and earning Filyaw's trust.

Girl in the Bunker airs on Lifetime on Memorial Day, May 28, at 8 P.M., with Julia Lalonde starring as Shoaf and Henry Thomas as Filyaw. Afterwards, the network will air a documentary special called Elizabeth Shoaf: The Girl in a Bunker, in which Shoaf herself retells the tale in her own words.

A clip from the film shows Shoaf being abducted by Filyaw, but not everything that followed. Shoaf's parents realized something was amiss when their daughter didn't show up after school and called the police, who assumed Shoaf was a runaway and did not put out an Amber Alert. Shoaf was utterly alone in Filyaw's hideout, unable to escape even though she was less than a mile from home. She did, however, have a plan. A little over a year after her release from captivity, Shoaf told USA Today:

I guess if I wanted him to trust me I'd have to have him think I kind of wanted to be there and be more comfortable letting me do things I wanted to do.

Over the course of ten days, Shoaf talked to Filyaw and was able to gain his trust enough to get access to his phone. She told him she wanted to play games on it, but as soon as he was asleep she sent a text to her mother. Authorities launched into action to find her, but it was reported on the news — which Filyaw and Shoaf were watching on a small TV in the bunker.

Though Shoaf explained to USA Today that Filyaw was furious, he also, strangely, asked her for advice about what to do. She told him to flee so that he wouldn't go to jail if he was caught -- and he did. He left Shoaf and took off, which allowed her to finally escape into the surrounding woods until she was found by searchers. "Finally I heard somebody yell my name and they came and took me to the hospital," she said. "I just started crying. I was happy."

Filyaw didn't get far. He was quickly taken into custody on charges of kidnapping, rape, possession of explosives, and impersonating an officer. He pled guilty to all counts and was sentenced to over four hundred years in prison, where he remains to this day. Now twenty-six, Shoaf continues to raise awareness about what happened to her.

Girl in a Bunker is a fictionalized adaptation of a real story, but it does seem dedicated to sticking to the facts.