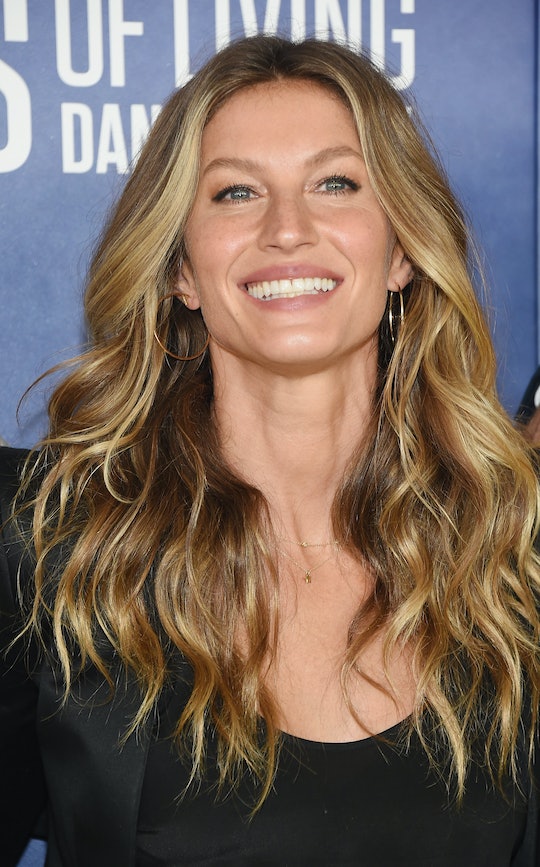 OK, I'm going to be honest with you. All I really know about football is that Gisele Bündchen's husband plays it and he's playing in Super Bowl 51, which is a big deal. Or so I'm told. So is Gisele Bündchen at the 2017 Super Bowl now? She's there and supporting her husband in the most Gisele way possible. Ever the supportive spouse, Bündchen posted a picture to her Instagram page of herself and several of the other women in Tom Brady's life wearing jerseys with "Brady's Ladies" on the back. I've recently learned that these are Patriots jerseys because Tom Brady plays for the New England Patriots. Again, I'm not exactly a font of football knowledge, but I'm learning.

As reported by Yahoo, one lady who unfortunately has not been able to attend his games is the quarterback's mother, Galynn, who has sadly been struggling with major health issues recently. But luckily, as revealed by an Instagram post of his own, Brady's mom has made it to Houston to support him in his seventh Super Bowl, in which he will face off against the Atlanta Falcons. Also in attendance is Brady and Bündchen's daughter, who is wearing a jersey of her own, reading Brady's Little Ladies. ‌

Though the supermodel obviously supports her husband on his big day and in his career, People reported that she's not exactly thrilled about the dangerous aspects of the game, and worries about him getting hit or tackled. Very rational and understandable. She reportedly gave him a necklace to wear as a good luck charm while he is on the field. "She gave me this for protection, and she’d be really happy that I’m wearing it because she doesn’t like anyone hitting me.” Brady said. “She always says, ‘Throw the ball really fast, really fast.’ So that’s what I try to do.”

I have a feeling that Brady's mom, Galynn, and the rest of the Brady's Ladies crew would be in full agreement of this. Heck, I don't even know the man and I hope he doesn't get hit too much. I'm sure they're all hoping that he throws the ball really, really fast, and thus avoids too much violence.

Personally, I'm excited to enjoy my first full football game, and hope that everyone has fun and that nobody gets hurt, because that's just the kind of sports viewer I am. And I kind of wonder where I can get one of those Brady's Ladies shirts.