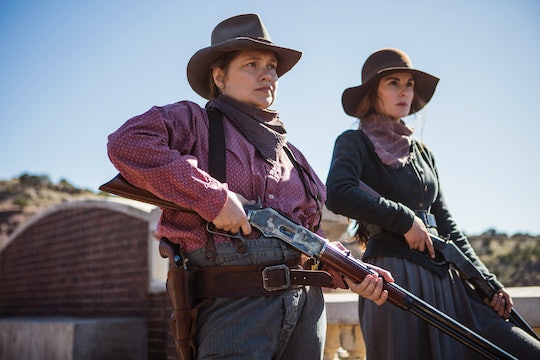 How Netflix's 'Godless' Is A New Kind Of Western

The western is a classic movie genre, though not one that has been seen a lot since maybe the 1970s. That all changes with the new Netflix series Godless, about a ghost town in the 1880s in which almost all the men have died. So is Godless based on a true story? The tale of dust-covered adversity is not based on any record of real events, but the setting is definitely based on historical fact. In small mining towns like La Belle — the fictional town of the series — sometimes an accident would kill all the town's men in a single day, which is what inspired the story.

Godless is the creation of Scott Frank, who wrote and directed the series with Steven Soderbergh acting as executive producer. Frank recently told Variety that he had always wanted to write a western. "I had no idea what the story was. I didn’t know anything. I just knew I wanted to write a western," he said. But in the creation of this series, he did not take a specific incident and fictionalize it as the basis for the story. None of the characters are based on historical figures and the action that makes up the plot throughout the season did not really happen (that we know of anyway). But as a period piece, it does stay true to historical fact.

When researching the late 19th century Southwest Frank came across the perfect inspiration for his story. "Sometimes all of the men would die in a single day in an accident, and the women would be left there. Sometimes they would all leave, and sometimes they would be stranded and have to make the town work. I thought, ‘Oh, that’s it. That’s the movie.' That’s where I began," he revealed to Variety. "My favorite theme is identity and people being stuck in lives they never planned on living. Most of the characters in this story fit that."

Already the show is racking up some excellent reviews, with critics praising the performances of the principle actors, including Downton Abbey alum Michelle Dockery (in a role as different from Lady Mary as you could wish), Merritt Weaver in a scene-stealing performance, and Jeff Daniels as the villainous Frank Griffin. Paste magazine called the series "the dictionary definition of 'bingeable,' and with a cast led by 19th century women doing it for themselves, it sounds like exactly the kind of show I will spend Thanksgiving weekend bingeing.

When the project began, Frank had intended for it to be a feature film. But when it was picked up by Netflix and turned into a seven-episode miniseries, it was found that this format allowed the story to move at its own pace, sometimes much slower than expected. Characters are given room to breathe and the setting, the gorgeous and dirty New Mexico desert, is allowed to shine. The series doesn't shy away from the clichés and conventions of the genre either, instead paying homage to the great western movies that came before it.

A review of the miniseries in The New York Times stated that "Whichever kind of western you’d like, he’s got it." Far from considering myself an expert on western movies, I still know what I like to see in these kinds of movies. I can't wait for squinting and sunburnt withering stares, shoot-outs, train heists, horses, hoop skirts, and lots and lots of horseback riding. And from the looks of things, I'm going to get exactly what I want.