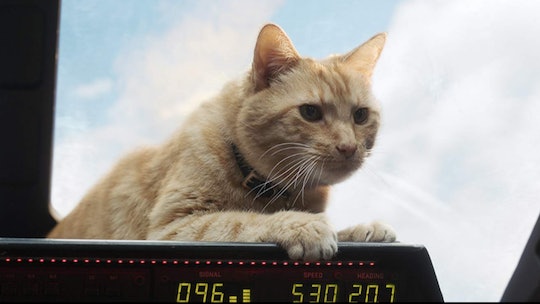 If You Want To Know If Goose The Cat Is In 'Avengers: End Game,' This Is For You

With the release of one of the most highly anticipated Marvel movies in recent history quickly approaching, our minds are abuzz with possibility. Though we know that we'll be revisiting some of our favorite characters like Tony Stark, Black Widow, and Captain America, you may be wondering if certain scene-stealing supporting characters (or, uh, animals) are in the final flick. More specially, is Goose the cat in Avengers: End Game? If you'd rather be surprised, I'd advise you to stop reading now, as there are some spoilers later on in this article.

For those who are otherwise unfamiliar with the Avengers universe or their past, Goose is a cat that appears in the comics and Captain Marvel, and has generated enough popularity to even be featured on some of the promotional materials, as TIME reported.

Goose is not anatomically a cat, but rather an alien species that physically resembles a cat. Goose is technically a Flerken, according to Refinery 29, and has played a pivotal role before, killing "bad guys," saving the Tesseract, and at one point, even scratching out Nick Fury's eyes. (Yeah.)

But as for whether or not Goose makes his iconic return in Avengers: End Game, well, don't get too excited too fast.

The last Captain Marvel post-credits scene seemed to set up Goose for a return in the next film, when a shot is included of Goose coughing up the Tesseract that she swallowed previously, according to Vox. Marvel Studios President Kevin Feige also hinted that she'd be making a return. According to SlashFilm, he said: "You and other people are asking, 'When do we see more of the cat?' The question is 'how long — what is the lifespan of a Flerken?'"

He continued, "A Flerken might be longer lived [than a cat]. And as we know from the comics, Flerken procreate quite a bit. I don’t want to say Tribble-esque, but there’s sort of points in those comics where they sort of are [like Tribbles] in terms of how many appear. So I’m sure there are more Flerken out there. And is Goose out there? She could be."

However, "could be" is not a definitive "yes," and it seems as though Feige was intentionally trying to keep the answer ambiguous likely to generate even more interest in the premiere. (Think about it: could a director, actor or anyone else involved with a film actually give away a highly sought after plot point? Unlikely.)

Be that as it is, the answer, sadly, is that Goose does not make a return in Endgame, though many fans still speculate that he might, and what his role might be.

Despite this minor disappointment, there's still a lot to look forward to when the film comes out later this week. In an interview with ComingSoon.com, executive producer Trinh Tran explained that there's a sort of culmination in the characters' stories.

She said, "There’s a reason why the original six Avengers are all there. There isn’t anyone in particular but to see these characters grow from each of their movies, since Iron Man but also from the first Avengers back from 2012 when it first came out and to see them there on the posters of Avengers: Endgame and see where their characters are from the beginning to where they are now... I think that’s the most exciting thing."

Tran added that the directors wanted to make sure they "preserved" what began in each of their movies, and brought them together as one, weaving them into a more uniform storyline. Though this likely doesn't include our beloved Goose, there's still a lot to look forward to come Friday when Endgame hits theaters.

More Like This
15 Awesome Movies For Families To Watch During Hispanic Heritage Month
Here's Where The 'Hocus Pocus' Characters Are 30 Years Later
10 Facts About 'The Nightmare Before Christmas' That May Surprise You
Disney Drops Strange World Trailer, A New Sci-Fi Movie About A Family Of Explorers