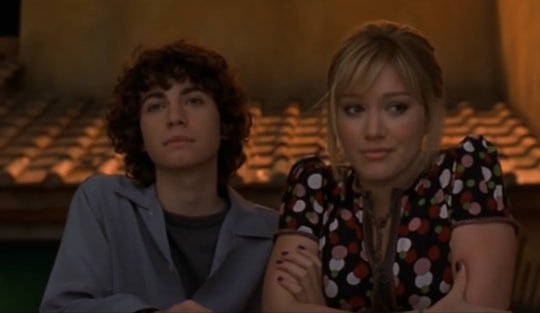 Gordo *Will* Be In The 'Lizzie McGuire' Reboot & Yes, This Is What Dreams Are Made Of

It's been a long, tiring wait, but Disney-obsessed 2000s kids are finally getting what they've been waiting for with the upcoming revival of Lizzie McGuire on Disney+. Finally! Hilary Duff, of course, is returning in her titular role as an adult, 30-something woman, but what about Lizzie's friends and enemies, like her BFF-turned-love interest, Gordo? Is Gordo in the Lizzie McGuire reboot?

On Wednesday, Duff took to Instagram to announce that the gang is officially back together and Gordo will indeed be joining the cast of the new revival. "It feels so basic saying something that has been shouted at me my whole life, buuut....hey now, hey now," Duff captioned the shot of her in costume as Lizzie leaning against Gordo.

Gordo, played by actor Adam Lamberg, will have a reoccurring role on the show that will focus on Lizzie living in New York City, according to Variety. Ooo la la, right? The show will introduce new characters to Lizzie's very fabulous life but will also bring back some fan favorites, like Lizzie's well-meaning (but sometimes embarrassing) parents, her mischievous brother, Matt, and now Gordo, too.

"I couldn't imagine the series without him," Duff told Variety. "I can't wait for fans to see what he's been up to 15 years later and how he fits in to Lizzie's adult world."

Let the freaking out commence.

It's not quite clear how Gordo will fit into Lizzie's new life. At the end of The Lizzie McGuire Movie (spoiler alert), Lizzie and Gordo finally kiss for the first time and he assures her that things will stay the same when they enter their freshman year of high school. But things haven't exactly stayed the same for the two over the past 15 years. Duff told Entertainment Weekly that Lizzie is engaged to a "dream guy who owns a cool SoHo restaurant" and confirmed to Vulture that it isn't Gordo.

But there's always the possibility that Lizzie could still be harboring feelings for Gordo, especially since Duff told Entertainment Tonight that Lizzie hasn't changed much herself. "It's the same Lizzie, but as an adult," she said. Could that mean sparks are still flickering?

A lot has changed since Lizzie McGuire wrapped. Duff is a mom of two and stars on TV Land's show, Younger, while Lamberg has kept a pretty low profile since his time on the show. After starring in two seasons of Lizzie McGuire and The Lizzie McGuire Movie, Lamberg appeared in two other roles before taking a break and attending college. Lamberg reportedly graduated from UC Berkeley in 2008 with a bachelor's degree in geography, as Bustle reported, and got his MPA from Baruch College in 2014.

In a post on his now defunct Tumblr blog, Lamberg revealed that acting was the "big question hanging out there" in his life. "I finished college and figured all I really knew was acting..," he wrote. "We'll see where it all goes."

Although their lives have changed quite a bit since Lizzie McGuire went off the air in 2004, the duo will officially be back together on screen when the new series makes its way to Disney+ in the near future. And that's what dreams are made of, folks.