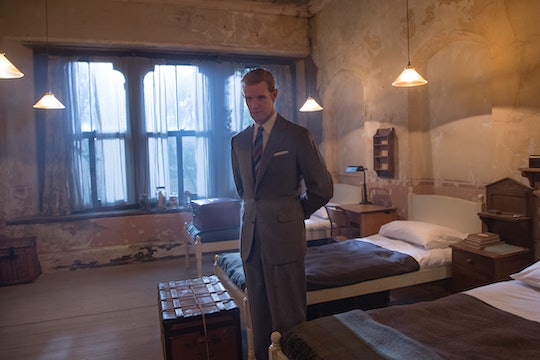 'The Crown' Delves Into The Backstories Of Prince Philip & Charles

As young Prince Charles grows older on Netflix's The Crown, the time approaches to send him to a "senior school." His father chooses a rather bleak institution in far away Scotland. But is Gordonstoun from The Crown a real school? The series is based, of course, on real events, and that includes the boarding school attended by both Prince Philip and his "sensitive" son Prince Charles. The school resembles nothing short of a prison in the show, and it turns out the series may have even softened it slightly from the real thing. Warning: spoilers for Episode 9 ahead!

In Episode 9 of The Crown, Prince Philip and Queen Elizabeth are trying to decide where to send their oldest child, Prince Charles, to school. It will be boarding school, obviously, because in my mind that is where all fancy British people are educated. Because of his gentle and sensitive nature (as well as bullying at his prep school), Charles's councilors recommend he attend Eton College, a stone's throw from the palace where he can come home on weekends. But Prince Philip insists on his own alma mater, Gordonstoun, a school in Scotland where boys wear shorts year round, take morning runs no matter the weather, after which they must all take an extremely cold shower. This, according to the school's ethos, will toughen them up. "Plus est en vous!" is the school motto, which means "there is more in you" in French.

The series depicts Charles as he struggles with the other students and his eventual humiliation during the school's annual "challenge," in which the young boys are sent off on a Tough Mudder-type obstacle course that's intended to build character. In real life, Charles' experience at the school was worse than this. Windows were left open at all times, even in winter, very similiar to what we saw Charles suffer through during his time there. But above all else, Charles was desperately lonely. In fact, a contemporary at the school recalled that Charles was bullied “maliciously, cruelly and without respite," according to The Telegraph.

Boys reportedly punched him in the head while he slept and threw things at him. According to Vanity Fair, whenever anyone tried to befriend him, the other boys made loud slurping noises to mimic "sucking up." As you can imagine, the friendships didn't last long.

The novelist William Boyd attended Gordounston with Charles, and described the school as "penal servitude." Of the almost institutionalized culture of bullying, particularly by the older students to the younger and weaker, Boyd said, "One felt in a way rather like a medieval peasant during the Hundred Years War. One never knew when another marauding army might march by, randomly distributing death and destruction." Charles himself said that his time at the school was "hell," which the captions at the end of the episode also echoed.

In the 1970s, the school became known as a place where parents sent their privileged sons to be toughened up. Today, however, the school has softened its image somewhat. Gone are the days of cold showers and canings, but the central ethos of rising to the occasion remains. On the school's website, beside a picture of worn hiking boots, it reads:

It’s not just a pair of boots. It’s standing on your own two feet. It’s taking everything life throws at you in your stride. And it’s leading the way, while offering a helpful hand to those around you. At Gordonstoun, all students take part in a programme of expeditions. It’s not a break from the classroom (where our teaching is genuinely world class). It’s an essential part of our curriculum and a principle we’ve held in the highest regard for more than 80 years. That the role of a school is not just to prepare students for exams. It’s to prepare them for life.

For what it's worth, Prince Charles' own sons went to Eton and didn't have to endure any of the emotional and physical trauma he faced as a young boy.