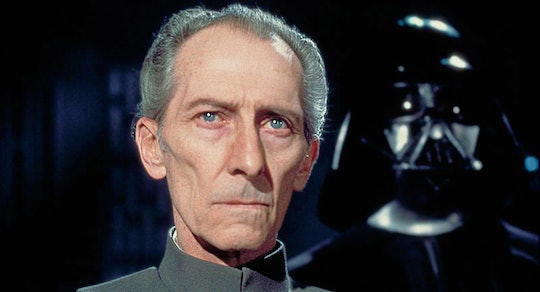 Is Grand Moff Tarkin Returning For 'Rogue One'? The New Trailer Suggests A Return

From Frankenstein to The Mummy, we've learned that resurrecting the dead is oftentimes a bad idea. However, when you bring someone back through digital means instead of the blast from a lightning bolt, I'm pretty sure you're in the clear of impending doom. Well, at least that's the case for characters like Mufassa in The Lion King, but when you resurrect Star Wars' Grand Moff Tarkin, you're poking a bear. In the latest trailer for Rogue One, we see the back of what appears to be the 1977 villain. Is Grand Moff Tarkin returning for Rogue One?

Well, sort of. Peter Cushing played the Death Star commander back in the day, but passed away in 1994. So unless a Back To The Future becomes a reality, it's impossible for him to reprise the role. Nonetheless, there's good news for OG Star Wars fans because technology is changing that.

According to The Telegraph, "computer-generated technology [will] digitally replicate Cushin." We've seen movies finished off after a sudden death a la Paul Walker in Furious 7, but never before has an actor's entire character been digitally produced from scratch, so this is a major deal. The Telegraph claims that "creating an entire performance via digital means is a relatively controversial phenomena." It's fitting that Star Wars would be the film to break new ground once again after all these decades.

In case you forgot who Tarkin is from the original, he is the evil dude that wanted Princess Leia's home planet, Alderaan, destroyed as punishment for supporting the Rebel Alliance. Luke Skywalker indirectly killed him off when destroying the Death Star. Considering that Rogue One is a prequel to the popular franchise, it adds up that Tarkin would fit into the film's equation, especially since the film's plot consists of Rebel spies trying to steal the blueprints for the Death Star. We've already heard Darth Vader breathe in recent trailers, let's wait and see if we hear Tarkin talk, or at the very least get a peek of his face.