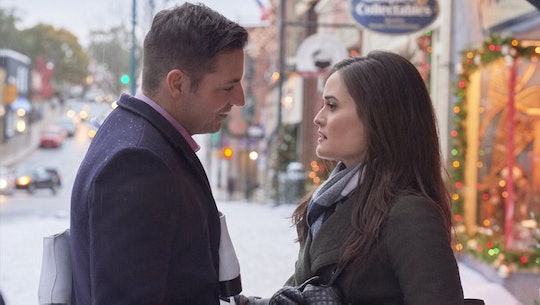 A lot of movies base their settings on real places. Though some choose to utilize a made up world to expand the cinematic universe in ways real locations can't. If you think about it, some of the most iconic movies use actual cities and towns as the backdrop, making them more relatable because you can actually visit them. For example, Hallmark's Christmas at Grand Valley has a gorgeous backdrop that elicits all the holiday feels. But is Grand Valley a real place?

From watching the official promo video for Christmas at Grand Valley on Hallmark's website, there's no definitive state mentioned. After some super sleuth internet searching (I Googled it), there is a place called Grand Valley, but it's not where you'd think. According to Wikipedia, Grand Valley is an "extended populated valley, approximately 30 miles long and 5 miles wide, located along the Colorado River in Mesa County, Colorado and Grand County, Utah in the United States." With that said, it doesn't look like the scenery in Christmas at Grand Valley is set in Colorado or Utah near a river. In the promo, Danicka McKellar's character, Kelly, said in regards to the movie's version of Grand Valley, "It isn't just a place, it's a feeling." You can't exactly visit a feeling, but the sentiment sounds lovely.

As far as other locations in the same realm as Grand Valley, Grand Valley State University exists in Allendale, Michigan, which is about 12 miles west of Grand Rapids. Sure, Michigan might produce a nice snow-covered set to be the backdrop for this Hallmark film, but unlikely. The movie stars McKellar and Brennan Elliot os Leo with an unexpected reunion by McKellar's former Wonder Years castmate, Dan Lauria, who plays her father, Frank. Yes — you read that right — Winnie Cooper (McKellar) from the hit '80s show is the daughter of Jack Arnold (Lauria). In some weird, twisted way, that has to mean that she and Kevin Arnold ended up together, right?

Christmas at Grand Valley is about Kelly — an artist so over the whole Chicago art scene — who returns to her hometown in time for Christmas. The place is of course Grand Valley and an obvious setting for true inspiration (and maybe love?). Frank is a town staple, running the local diner and obsessing over all things Christmas. He's even deemed "Mayor of Christmas." He and Kelly are incredibly close, which is great to see in any original film. It's not long before successful businessman, Leo, enters town on a Christmas vacation with his kids to review a local hotel. It's refreshing to see the whole work-family life balance portrayed by someone other than a woman, because the struggle is real. Eventually, Kelly and Leo meet, and through the town's festivities with Leo and his kids, Kelly finds her long lost art inspiration (and maybe love?).

When it comes down to it, does it really matter if Grand Valley in Christmas at Grand Valley is a real place? It could be the version located by the Colorado/Utah river, it could be some alternate version of GrandValley State University's campus, or it could be from the creative minds who wrote the script. There's snow, holiday joy, and probably mistletoe somewhere. That, to me, is real enough.