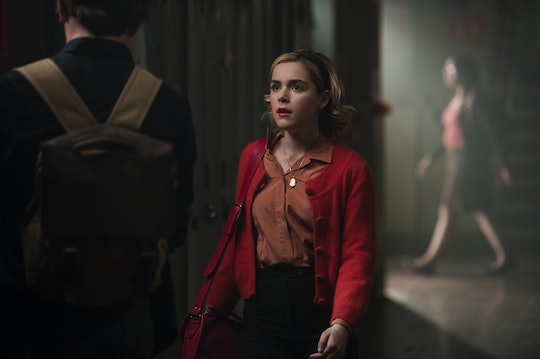 Fans have a lot to unpack from the Chilling Adventures of Sabrina: A Midwinter’s Tale episode, which brought some of the weirdest and coolest witchy holiday traditions to life. Along with burning yule logs and gathering around the yule tree, the Spellman family had to fight off Gryla and her maniacal Yule Lads. Gryla’s name and story might sound familiar, so fans are wondering, is Gryla a based on a real demon?

The story of Gryla actually comes from Icelandic folklore. According to Smithsonian Magazine, Gryla is a mythological pagan monster that has been around since before the 1300’s, but she became associated with Christmas in the early 19th-century when poems started connecting her to the holiday. In the stories, Gryla was heralded as a giant mountain dwelling witch who would come down every winter to find naughty children to eat.

In an interview with Smithsonian Magazine, Terry Gunnell, the head of the Folkloristics Department at the University of Iceland explained that the country’s midwinter holiday is referred to as “jol” or “yule,” and in its earliest celebrations, families would reunite with their living and dead relatives, along with getting visits from all sorts of magical creatures. He noted that Gryla and her sprawling family of monsters has been a part of yuletide folklore in Iceland for centuries, but prior to that she was “a personification of the winter and the darkness and the snow getting closer and taking over the land again.”

Gunnell noted that there are numerous ancient poems and sagas about Gryla, and they each described her with varying attributes. One poem reads, “Down comes Grýla from the outer fields,with forty tails, a bag on her back, a sword/knife in her hand, coming to carve out the stomachs of the children who cry for meat during Lent.” In another poem, Gunnell said that Gryla was described as an evil and fickle spouse who would eat her husbands if she was displeased. “Long poems were written about her and a husband, but he didn’t last long,” explained Gunnell. “She ate one of her husbands when she got bored with him. In some ways, she’s the first feminist in Iceland.”

When talking to the Reykjavik Grapevine, Gunnell said that in ancient Icelandic poems, Gryla had 13 sons called the Yule Lads, who possessed different quirky and menacing traits. He said that in Icelandic culture, the Yule Lads are similar to Santa, and one comes down each day starting Dec. 12 all the way through Christmas. In earlier stories, the Yule Lads were mean, and would steal rather than give. With the passing of time and outside influences, Gunnell said the Yule Lads story turned into a happier one, but their mother’s remained the same. “The Yule Lads only started giving gifts in the 20th century,” Gunnell told Reykjavik Grapevine. “The Yule Lads became nicer, but Gryla stayed mean.”

But in the midwinter episode of Chilling Adventures of Sabrina, Gryla’s story is slightly different from the original. Instead of being depicted as a mean-spirited witch, Gryla has a mission that is more admirable and purposeful. Alongside her Yule Lads, Gryla is now the witch protector of lost children, and while she still kills and eats people, she’s just trying to atone for the sins of her past.

The history of Gryla is fascinating, and I think it’s really important to learn about different cultures and customs, even if it’s through a TV show. As mesmerizing as Gryla’s story is, it’s still pretty terrifying, so I might have to stick with team Santa for the holidays.