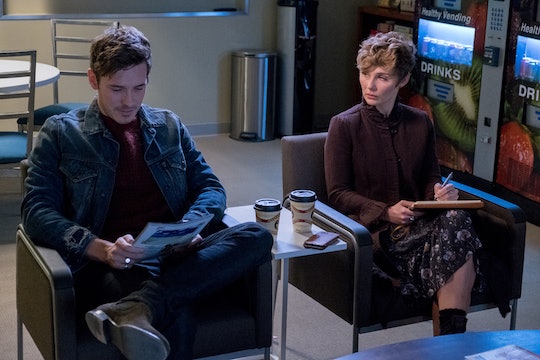 Nashville returned for the second half of Season 5 with its midseason premiere on June 1, and even though it's been ten weeks since the last episode, it addressed Season 5A's cliffhanger right away. In the final moments of the midseason finale, we learned that Scarlett was pregnant, and having recently had sex with both her ex, Gunnar, and new fling, The Exes' music video director Damien George, fans were left wondering: is Gunnar the father of Scarlett's baby on Nashville?

The first time we see Scarlett in Season 5B, she's at the doctor getting a pre-natal checkup. We learn that she got a cheek swab from Gunnar to test his paternity, but decided not to even tell Damien that she was pregnant. She's obviously hoping Gunnar is the father just so she'll never have to see Damien again. The Exes seem to be on good terms and are even touring together during the early stages of Scarlett's pregnancy, though she isn't having the most fun navigating nausea, low food intake, and the high energy of live performance. But Gunnar seems supportive and eager to receive the paternity results. Damien tries calling once while they're together, but Scarlett ignores his call. It really seems like she's hoping for a life with Gunnar.

Unfortunately, all this set up virtually guarantees that Gunnar isn't the father, and, if that's what your soapy drama instincts were telling you, too, you'd be correct. Scarlett and Gunnar open the test results together and discover that he's been eliminated as a candidate to be the biological father. Gunnar instinctively slips into one of his characteristic periods of moping, confiding in Avery that he had gotten attached to the idea of raising a kid with Scarlett. Avery convinces Gunnar that his dream is still possible, and that he could still be a dad to Scarlett's baby, even if he's not its biological parent. (What a concept!)

Gunnar eventually ends the episode full-on sprinting to Scarlett's house in a moody montage set to Maddie's new single. He begs her to try and raise the baby together, even though he's very clear on the incredibly high likelihood that he will let Scarlett down sometimes. She agrees, on both counts. In previews for next week's episode, we see Scarlett confessing it all to Damien, so the storyline definitely isn't neatly wrapped up just yet. You can keep watching Nashville through the rest of the summer Thursday nights on CMT.