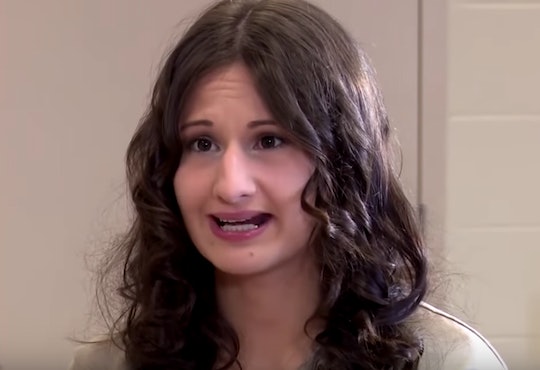 Gypsy Rose Blanchard reportedly has a serious love interest in her life. The inspiration behind the Hulu drama, The Act, is currently in jail after pleading guilty to second degree murder in the death of her mother, Dee Dee Blanchard, according to People. Though she's in prison, it sounds like Gypsy is still living her life and connecting with someone special on the outside. And after reading recent reports, some people will definitely be curious about whether Gypsy Rose Blanchard is engaged right now.

A supposed family friend of Gypsy's, Fancy Macelli, recently told In Touch Weekly that Gypsy is now engaged to someone who she met and fell in love with while she was in jail. Romper has reached out to Macelli for further comment, but did not immediately hear back.

The couple reportedly met through a "pen pal program," according to In Touch Weekly, and started communicating through letters. From there, they fell in love. "They grew to have a relationship," Macelli told In Touch. "They're taking it slow. They don't know exactly what they're going to do when she gets out. It's a long way down the road, obviously, but things change."

Despite taking it slow, Macelli also told People that the couple is engaged and happy, even though Gypsy Rose behind bars. “They are very happy,” Micelli told People. “You can hear excitement in her voice.”

Macelli did not reveal the identity of Gypsy's reported fiancé, telling In Touch that Gypsy "keeps him very private."

With all this said, it's important to take these reports with a grain of salt. Until Gypsy herself confirms this, it's impossible to know all of the details surrounding her reported engagement and their plans for the future.

People who have been watching The Act, or have been following along with Gypsy Rose's story, are certainly eager to hear updates about her life.

Gypsy Rose was sentenced to 10 years in prison at the Missouri Chillicothe Correctional Center after being convicted of second degree murder of her mother, according to Marie Claire. Before this happened, Gypsy spent her whole life believing she was terminally sick. But once she began to realize that all of this had been a lie, she was desperate to escape.

Gypsy is up for parole in 2023 when she is 33 years old, after serving seven years of her sentence, according to Women's Health. And it sounds as if she has big plans for her future once she is out. In an interview with the Springfield - News Leader in February 2018, Gypsy's stepmother, Kristy Blanchard, said that her stepdaughter is super happy without her mother's influence. "She is thriving," she said.

"Despite everything, she tells me she's happier now than with her mom," she added in the same interview with the Springfield - News Leader. "And if she had the choice to either be in jail, or back with her mom, she'd rather be in jail."

Once Gypsy is out, it's unclear what her plans will be. It's up to her to decide if she what her "normal" will be — whether that's with her reported fiancé or on her own.