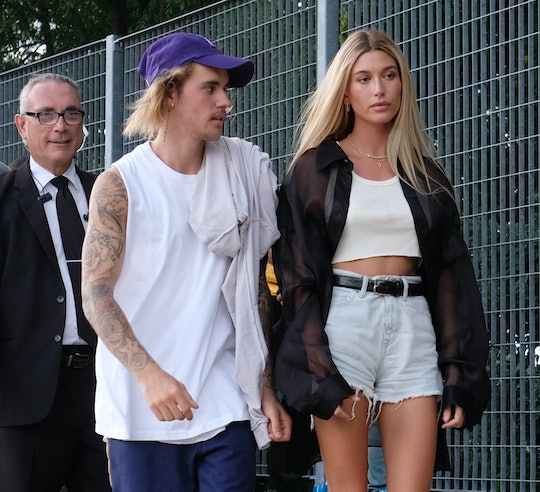 It's something that happens every year without fail on April 1: Fake pregnancy announcements. Which is exactly what some Instagram users thought when Justin Bieber shared photo of a sonogram on Monday. So is this some sort of terrible "joke"? Or is Hailey Bieber pregnant? Because Justin Bieber caused a riot on Instagram. Romper has reached out to Hailey and Justin's reps, but did not immediately hear back.

On Monday, April 1, Bieber posted an Instagram photo of an ultrasound with no caption, ET Online reported. Nothing. Many of his followers immediately assumed this meant his wife, Hailey Bieber, was pregnant — although some were also skeptical considering today's date. (As they should be.) One follower commented, "APRIL FOOLS U GOT ME!! wait, unless ur serious and ur gonna be a dad."

Yet another person declared, "Trust no one today 🙄🙄."

It's worth noting that Hailey also commented on her husband's post, writing, "Very funny..." according to Glamour.

So that settles it, right? It's simply a tasteless prank that's been wayyyy overdone through the years. Ha ha ha. Not.

Except, Bieber soon followed up his post with another photo — of Hailey at a doctor's office. He captioned the second post with, "If U thought it was April fools." In this picture, Hailey has her hands on her belly as what appears to be two gloved medical professionals are doing something. And is that an IV drip next to her? What the heck is going on? What is real anymore?!

Although I'm still trying to figure out what, exactly, is going on in this second photo, apparently it was enough to convince some of Bieber's fans. One person wrote, "CONGRATUALTIONS 💖💖."

Others, though, weren't budging. "It definitely still is... there is no way 😮," one person commented.

A short while later, Justin posted a third photo — of a sonograph with a puppy inside of it. "Wait omg is that a,,, APRIL FOOLS," he wrote.

"You totally got us. Wow. Shook 😴," one person commented.

Another Instagram user wrote, "AWHHH MAN!! You got us all! We were sending up prayers and all! lol."

Yikes. Sorry to be a buzzkill, here, but — "jokes" like this really aren't funny. Like, at all. And I'm not the only one who thinks so. "Not even a little funny to fake a pregnancy," one follower wrote.

"It's so f*cked up to use pregnancy as an April fools joke Idk why people DONT KNOW THIS," one person commented on the "puppy ultrasound" photo. "It's insulting to couples who are struggling to get pregnant or who have had miscarriages. Pregnancy is not a joke."

Yet another Instagram user wrote, "Wow. I seriously hope you don't suffer the pain of infertility. April fool's or not this is crass."

Here's the thing: As many as 1 in 4 known pregnancies end in miscarriage. And roughly 9 percent of men and 11 percent of women of reproductive age in the U.S. have experienced fertility problems. How crushing must it be for people who fall into these categories to stumble across something like this on April 1?

Unfortunately for Justin Bieber, it's too late for him to take back the prank. Even though I'm sure he's probably regretting it about now — judging by the overwhelmingly negative comments on his Instagram posts. But just in case you or someone you know ever considers doing something similar, please don't. Because it's not funny in the slightest.