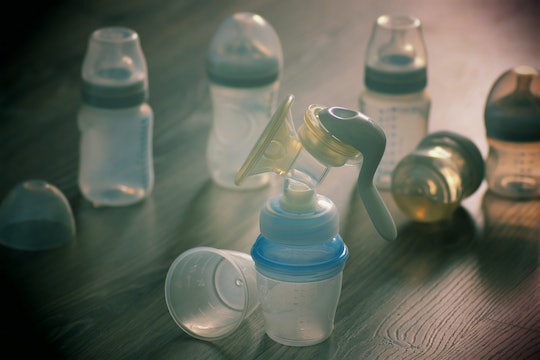 Here's The Deal With Hand Expressing Versus Pumping

When you're pregnant, if you're planning on breastfeeding, the idea of how you're going to feed your newborn can be fraught with concerns. Should you buy the pricey pump or the cheaper manual? Do you plan on pumping at all? What about hand expressing? Is hand expressing as good as pumping? What is hand expressing?

More Like This
Here's The Deal With Babies Who Sleep With Their Eyes Half Open
Um, "Rusty Pipe Syndrome" Is A Thing, & Every Breastfeeding Mom Should Know About It
I've Missed You So Much! You Still Can't Touch The Baby.
Experts Offer Tips On How To Wean — Whenever You’re Ready

Hand expressing, also known as manual expression, is the manual manipulation of your breasts to let down and express milk into the container of your choice, according to La Leche League. It does have a learning curve, and it's not for everyone, but according to a study by the University of California, San Francisco, it can yield great results. Specifically, the study found that women who learned the skill, and utilized it in the early stages of breastfeeding, were more likely to breastfeed longer. They also were found to be more comfortable breastfeeding in non-traditional locations. Incidentally, at this point, I think I could breastfeed at mass and not care. (The Pope says it's fine anyways.)

As far as output goes, Breastfeeding USA stated that exclusive hand expression may lead to a greater supply of milk for the nursing mother. A 2009 study in the Journal of Perinatology found magic in the combination of manual and mechanical expression of milk to increase the volume of the milk expressed by up to nearly 1000 milliliters per day after a few days of working this combination. That's a lot of breast milk, but there are definitely pros and cons to either manual or mechanical expression.

The obvious drawback of manual expression is hand fatigue. If you've ever had any overuse injury, you'll know it's a real issue. For people like me with limited use of one or both of their hands, it can be difficult or impossible.

Tera Hamann, BSN, RN, International Board Certified Lactation Consultant (IBCLC), tells Romper hand expression and breast massage can increase supply, which might, hypothetically, be an issue if you are sensitive to oversupply. She also notes that it is a learned skill. I mean, the first time you do it, it's probably just a shot in the dark.

As convenient as not ever having to worry about batteries or lugging a machine is, the idea of not being able to do anything else while you pump is kind of a pain. After all, there are no fancy hands-free pumping bras if you're pumping with your hands.

The convenience is hard to beat, though. If you have a pair of working hands, you have a pump. It's silent and it's free.

Pumping definitely has its drawbacks. For one, those machines can be very expensive. The average cost of an electric breast pump is $200. They require batteries or an outlet, and they aren't small. They also aren't silent, so it can feel conspicuous or be disrupting to a sleeping baby. They also have a lot of parts that need cleaning — your hands just need a solid washing.

However, with all of the hands-free pumping bras on the market, you could read a book, knit, or even write a book while you pump. It does all the work. Plus, it's kind of entrancing to watch the spray. The answer to the question, is hand expressing as good as pumping, seems to be yes, but that doesn't mean it's right for you. You need to decide that. Maybe you do one or the other or neither. Knock yourself out.