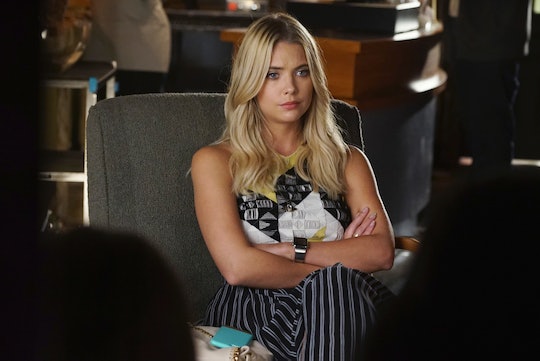 Is Hanna Dead On 'Pretty Little Liars'? Her Life May Be In Danger

I said the plan was a mistake from the moment Hanna and Caleb suggested it — but no, no one listened to me. OK, wishful thinking, but look at where it got us. Hanna appears to be dead on Pretty Little Liars and everyone is freaking out because she's not in the safe house that apparently wasn't very safe in the first place.

In the Pretty Little Liars finale, Hanna went missing. Well, the audience knows where she is, but the rest of her friends have no idea where she went. What we know is that after a failed attempt at smoking out their tormentor, Hanna went missing and is now possibly dead in the church. Ironic, considering Hanna had just falsely confessed that she killed Charlotte in the church. Oh, the tangled web these Liars weave.

A lot happened in the final moments of the 6B finale, but one of the biggest "WTF"s was Hanna's lifeless body being dragged across the church. Sure, some might argue that the fact that Elliot and Mary Drake — Jessica DiLaurentis' twin sister — are working together to take everyone down was the biggest shocker, but I'm more worried about the fact that Hanna might be dead and Ashley Benson might not be returning to Season 7. Her and Caleb just reunited, dammit, we can't have this type of loss.

In the finale, Hanna revealed to Caleb that she came back for him when they broke up in New York, only to find that he had already moved out. (He's a quick packer, OK?) She said that had she just been a few minutes quicker, things could have been a lot different for the two of them. Caleb agreed and then Haleb fans everywhere squealed as the two kissed before being interrupted. It's promising that these two will potentially explore their relationship further in Season 7... if Hanna makes it to Season 7.

I don't think Hanna is going to be dead when the show returns for Season 7, but I do think that her friends are going to have to work overtime to save her. That is not a promising drag across the floor, plus, her attacker has already put flowers in her hands. Is that supposed to be a symbol of her being at rest already? I. Marlene King, I'll just patiently wait here for answers.