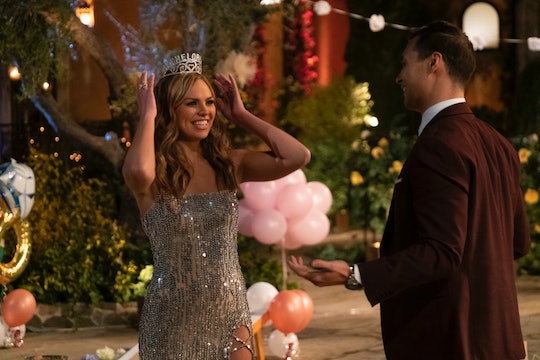 Hannah B.'s Road To Engagement On 'The Bachelorette' Is Not An Easy One

Twenty-four-year-old Hannah Brown is about to embark upon her Bachelorette journey, but fans tuning in as the notoriously awkward former pageant queen makes her debut may be wondering: is Hannah B. engaged after The Bachelorette? Chris Harrison spoke to Entertainment Tonight as Hannah was heading into shooting the finale and the host has some serious doubts.

Apparently, it's been a rocky season for Hannah, who's suffered from a particularly badly behaved group of guys. Harrison teases lots of drama that struggles to resolve itself as the season progresses, as well as a lot of guys being there for ~the wrong reasons~.

"I wish I could guarantee [a proposal], but I cannot deliver...I don't know, I would love to be able to do my job and deliver this, but I don't know if we're going to," Harrison told ET in an interview a week ahead of the season premiere. "It might be a bumpy finish."

As ET points out, every Bachelorette season in history has ended with a man proposing, so precedent is on Hannah's side. But it sounds like she had a really frustrating group to contend with, and the fact that she's on the younger side for a Bachelorette probably didn't help matters. The preview for her season shows Hannah forced to give firm talking-to after firm talking-to, begging the group to get it together. Harrison even reveals that the sheer volume of drama starts to take away from the season, and from Hannah's journey as the Bachelorette. Although he says she took control of the situation beautifully on night one, it's hard not to wonder if her age discouraged the guys from taking her and the process more seriously.

Harrison went on to explain that usually, at this point in the process, it's "smooth sailing" for the Bachelor or Bachelorette. To him, Hannah seems far less settled, but at the same time, she refuses to get engaged at the end just because it's what's expected. She wants to really feel committed and intentional in making her decision.

For her part, Hannah maintains that she's extremely ready to get engaged. "This is something I really believe in," she told People back in March, when she was first announced as the Bachelorette. "And at the end of the day, I want somebody who loves me and chooses me. I’m ready for my moment."

Needless to say, Hannah was a wildly popular pick for Bachelorette and she definitely has tons of fan support. If producers gave her a group of duds, Bachelor Nation won't be shy about calling the show out for it. Both Hannah and her fans know what she deserves and if she has a bad season, I very seriously doubt anyone will be blaming her for it.