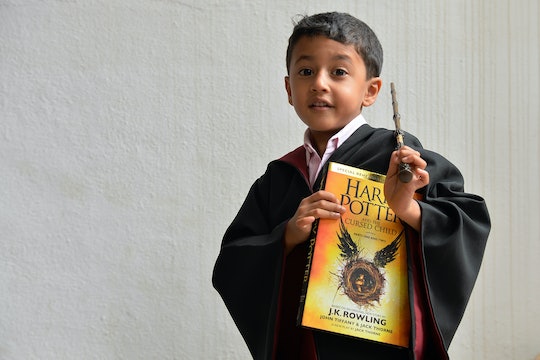 Though the conclusion of Harry Potter and the Deathly Hallows led fans to believe that the Harry Potter series was finished, it turned out that the final sentence of the series, "all was well," was only a temporary ending for The Boy Who Lived. But fans who are hoping for yet another surprise Harry Potter revival may find themselves disappointed.

At the premiere for Harry Potter and the Cursed Child, RadioTimes reported that Rowling told the press that The Chosen One "goes on a very big journey during these two plays and then, yeah, I think we're done." To add injury to insult, she went on to say, "this is the next generation, you know. So, I'm thrilled to see it realized so beautifully but, no, Harry is done now."

Though The Cursed Child may mark the end for the Harry Potter series, that doesn't mean that Rowling is stepping away from the wizarding world as a whole. In a red carpet interview with BBC journalist Lizo Mzimba, Rowling recently confirmed that the upcoming Fantastic Beasts and Where to Find Them film is more of a Harry Potter prequel than people may realize.

Not to mention that, since the creation of Pottermore in July 2011, Rowling has created a more in depth platform for Harry Potter fans to experience the world she so expertly crafted. Recently, she introduced the wizarding school of Ilvermony, located in North America. Complete with a quiz to sort you into your proper Ilvermony house, and a short story describing the history of Ilvermony, fans can only hope that maybe Rowling's next project will be a new witch or wizard whose story takes place at Ilvermony.

Though no wizard could ever take the place of Harry Potter in the hearts of readers who have loved him from the beginning, one can still hold out the hope that Rowling will someday introduce readers to a brand new magical saga, full of heart, hope, and adventure.