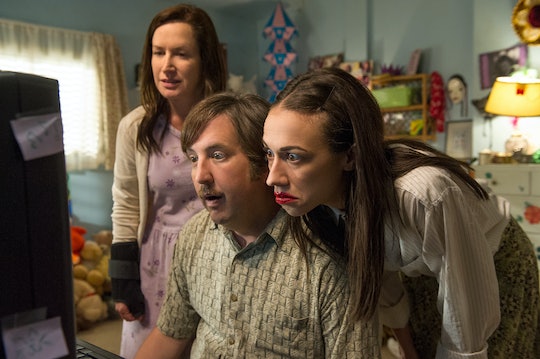 Is 'Haters Back Off' Based Off Of Miranda Sings' YouTube Channel? MirFANdas Will Be Happy

Insecure, Broad City, and Drunk History are all shows that got their start on the internet, and eventually made their way to actual television. More than ever before, it's possible to become a self-made superstar. Which is exactly what Miranda Sings, the character created by Colleen Ballinger in the new Netflix series Haters Back Off!, is trying to do. Or as she believes, has already done. Is Haters Back Off based on Miranda Sings' YouTube channel like these other shows? As a matter of fact it is!

Miranda Sings' incredibly popular YouTube channel, in which she gives terrible makeup tutorials and even worse voice and dance lessons, among other pieces of advice, actually started as something of an inside joke between Ballinger and her friends. The idea was a parody of people who try to achieve fame, regardless of any tangible talent, through YouTube videos shot in their bedrooms. When Miranda's video "Free Voice Lesson" went viral in 2009, suddenly Ballinger found that she had, as a matter of fact, gotten famous through YouTube. From there, her character developed more fully, and Ballinger began doing other projects, including writing a book Selp Helf, appearing on Comedians in Cars Getting Coffee, and playing Pictionary on Jimmy Fallon, as well as going on a national tour.

From this expanded resume and more fully realized character, the idea for the show was born. Together with her brother, Christopher Ballinger, Ballinger wanted to explore more fully Miranda's world. "Six or seven years ago, we started developing the idea of Miranda’s world. We were actually writing a movie, but then we quickly realized we had so much more story to tell that we wanted to make it into a TV show," Ballinger said in an interview with The Verge.

Haters Back Off is a scripted series based around the character and is being described sort of like the Miranda Sings origin story. Miranda has often said that she was homeschooled by her mother, and in the Netflix series we get to see exactly what her mother was like. It turns out she answers a lot of questions about Miranda. Bethany fakes fibromyalgia to get dates, for example.

Haters Back Off is a lesson to everyone trying to make it in show business, that it's possible through the power of YouTube. Though this is maybe not the lesson Ballinger was going for originally.