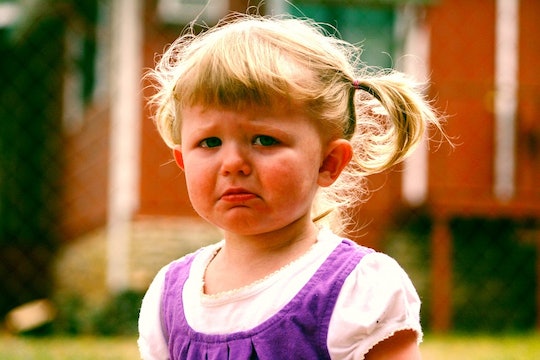 Is Having Another Kid Going To Make My Toddler Angry At Me?

When my friends and I were in round one of having babies, we were concerned about the safest car seat, which baby carrier was the most streamlined, and which books would make us the best parents in history. But when we started on round two of pregnancies, most of us still had children that were young. During this time period I was not alone in wondering if having another kid is going to make my toddler angry at me. After all, this is a valid concern. Up until this point, the first born has had all the attention and love focused on them and them alone. So mixing up that dynamic is likely to make some waves in the relationship you and your toddler share.

Although you know that deep down your toddler loves you, bringing another baby into the home can ruffle some feathers. As Parents magazine pointed out, at the core of sibling rivalry is splitting up the attention of the parents on more than one child; and this situation can start to unfold while your new bambino is still in the womb. But luckily, there are some steps you can take to ease the tension, and keep your toddler from channeling those negative feelings toward you.

Once the news of your pregnancy is out, you'll want to start preparing your toddler, which could help the two of you strengthen the already special bond you share. As What To Expect's website pointed out, "a toddler’s whole mom-cenric world is changing in ways that can be scary and unsettling." Because of this, it is easy to see why your little nugget might start to project some not-so-sweet feelings on mama. But you're going to need to think outside the box, because it's going to take more than some explaining to make your toddler feel secure in the transition to older sibling.

When the new baby arrives, no doubt there will be tons of photos being snapped. Make sure to not only include your older child in these pics, but also take some of them alone, as Mayo Clinic suggested. This makes them feel like they are still getting some personal attention, and that the new baby is not the only star of the household. This goes for gifts as well. With the baby receiving so many arrival presents, you may want to have a few treats and goodies on hand for your toddler, so they feel important as well.

It's also a good idea to keep your eyes peeled for certain behaviors that let you know your toddler is not happy with you. According to Kid's Health, it can be difficult for toddlers to say how they're feeling and often you will learn more about their thoughts by observing their actions. A sudden spike in tantrums, misbehaving, or regressing to baby-like behaviors are all signs your child is looking to get more attention from you. But chances are, if you address the behavior and spend some one-on-one time with your toddler, the behaviors will disappear in time.

There's no perfect scenario for changing family dynamics. Some toddlers adjust seamlessly, while others become extremely jealous of the new baby. What it all boils down to is: sharing your mommy is hard. Your toddler may give you the stink eye for a while after the new baby arrives, but given enough attention and love, this too shall pass.