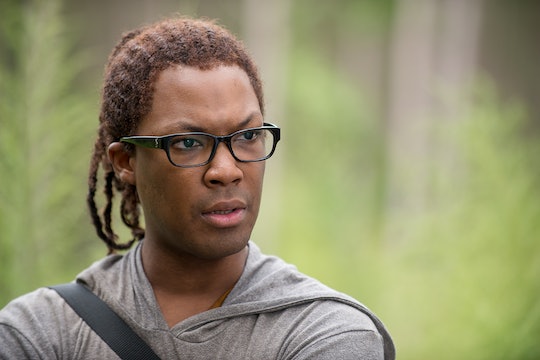 Heath's Fate Is Still A Mystery On 'The Walking Dead'

Heath has been missing in action for weeks on The Walking Dead. After going on a supply run with Tara, he went missing and was never seen from again. Though there appeared to be some clues left behind (his glasses, a strange key card), neither Tara nor the audience knew what happened to him. Heath was also in a pretty dark place before he disappeared, so he might not be in the best state, wherever he is. But is Heath still alive on The Walking Dead?

Heath is still kicking in the current run of The Walking Dead comics, but that doesn't necessarily mean anything about his fate on the show. Plenty of characters are alive on the show but dead in the comics and vice-versa. But just because Heath is gone doesn't mean he's dead. He could have been kidnapped, or just decided to strike out on his own because he couldn't bear to be a part of things anymore, like Carol.

The fact that the show left his exit ambiguous means that he could really return at any point, similar to Morgan's comings and goings over the years. The show could be keeping quiet about his whereabouts to make it as surprising as possible when he does show up again.

Corey Hawkins, the actor who plays Heath, may have departed from the show because he landed a lead role on the new series 24: Legacy, which reboots the popular series 24. However, Hawkins did speak about Heath's fate at the TCAs and said, as reported by Collider, "It's usually very finite, right? But me and [showrunner] Scott [Gimple] have had a lot of conversations; Scott has been great in terms of asking and talking and really trying to figure out where the character was coming from and going and, you know, professional things take you where they take you, that's normal. But we left it open... So I will just say there is always a possibility, there is always a way."

While that provides no information about what happened to Heath or where he is now, it does reassert that the door is always open for him to come back. Without an official confirmation of his death, he could easily return to the show. There's no guarantee that Heath is still alive, but there's no guarantee that he isn't, either. It may not be a satisfying answer for fans, but it's one that leaves room for hope.