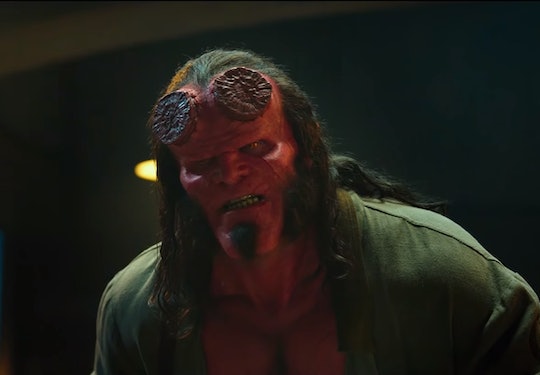 Parents, If You're Seeing 'Hellboy' This Weekend, Spring For A Babysitter

Many of the comic-based movies that have come to theaters are fun romps with a solid message, so it’s tempting to think they all are. So with one hitting theaters this weekend, parents may be wondering if Hellboy is appropriate for kids under 10 years old. With this movie, the decision is easy — it’s a firm no, it isn’t.

The very first clue that this isn't a kid-friendly film comes courtesy of the MPAA. That bestowed an "R" rating on Hellboy, citing “strong bloody violence and gore throughout”. That does seem pretty definitive. So if you don’t let your kids watch slasher movies, you probably won’t want them to see this one either. If you're not convinced, Forbes' review says Hellboy “is filled to the grim with ghoulish sights, horrific violence, punishing (if deeply unpoetic) action and unapologetic (if arbitrary) fantasy elements.”

According to Common Sense Media, older teens might be able to handle it, setting an age range of 16 and up for Hellboy. "It’s extremely violent, with tons of computer-generated blood and gore," Common Sense Media states in its review, "Characters are killed, and there are torn-up body parts, severed heads and limbs, and gouged tongues and eyeballs." Yeah, that age threshold sounds perfectly reasonable.

Besides the violent surface there is also what might be a disturbing backstory for some kids in the entire concept of Hellboy.

The character of Hellboy was, as the name suggests, drawn up from hell by an occult experiment courtesy of some Nazis, according to USA Today, and he’s lived in the human world with an adoptive father, working for the Bureau for Paranormal Research and Defense. A lot of that origin tale was told in the first two Hellboy movies, with more subtlety and humor.

But in this turn, the story leans heavily on the evil side of mythology, featuring a villainous dismembered witch, a medium, and even a shapeshifter fighting for the good team. The Los Angeles Times called it “…a smorgasbord of R-rated horror and fantasy conventions, replete with weird detours into Arthurian legend, Mayan mythology and Slavic folklore.”

This is still a superhero story, but in this installment of Hellboy’s story, he’s struggling with his origins and his supposed destiny, according to USA Today. It’s like an angsty teen crossed with a wisecracking frat-bro, both trying to come to terms with their demonic side.

Hellboy stars David Harbour — the beloved Chief Hopper in Stranger Things — as the title character. Milla Jovovich plays his nemesis and Ian McShane is back as his father. Fighting on Hellboy’s team this time are Sasha Lane and Daniel Dae Kim, according to IMDb. Harbour does his best to embody the character with the same humanity that Ron Perlman brought to it in 2004 and 2008, but “this movie gives him far less time and room to breathe, according to the Los Angeles Times. It was directed by horror-guru Neil Marshall, which explains a lot about its bloodthirsty nature.

The New York Post was particularly biting in its review, saying that “This awful, disgusting, unfunny, idiotically plotted comic book flick offends the senses as much as the rankest subway car on the hottest summer day.” So it’s pretty easy to make the call, this creature-feature is probably best left to the Deadpool crowd. Hellboy is in theaters now.