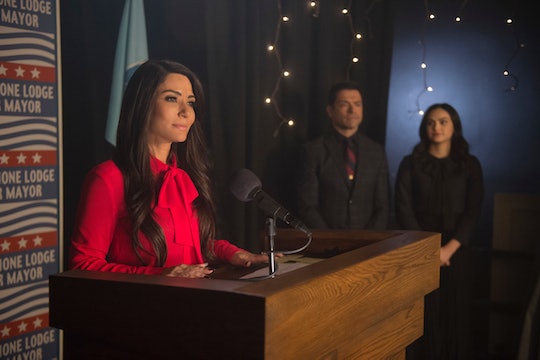 Here's What Marisol Nichols Says About Hermione Being The Gargoyle King

If there’s one thing Riverdale fans are dying to know, it’s the identity of the Gargoyle King. There are plenty of shady characters in town that fit the bill, but some fans think that the manipulative game master might just be the town’s new Mayor. Hermione Lodge has made some questionable decisions in the past, so fans are wondering, is Hermione the Gargoyle King? Well, actress Marisol Nichols doesn’t see the connection.

When visiting New York City for a Vicks VapoCOOL event, Nichols talked to Romper about the fan theories linking her Riverdale character, Hermione, to the Gargoyle King. “I mean, nothing surprises me on Riverdale anymore, but I don’t personally know, at least right now, what the motivation behind that would be,” says Nichols. “Like why would she terrorize Betty, and terrorize the town, and kill people. I don’t know why.”

Nichols says that while other characters have had clear motives behind their villainous plans, Hermione doesn’t have any obvious motivation to be the Gargoyle King. “With Hiram, we’re very clear about his motivation. With Black Hood we understood why,” she says. “For Hermione I don’t really know why, but again, I know nothing — I have no idea, we’ll see.” Of course, anything can happen on Riverdale, so I wouldn’t take Hermione completely out of the equation. And Nichol’s open-ended “we’ll see” just means that fans won’t know the identity of the Gargoyle King until they’re meant to.

Some fans have been taking to Reddit to share their theories on the Gargoyle King, and why they think Hermione is involved. Redditor Theynotsmarterthanus suggested that because Hermione was the person who actually found the Gryphons and Gargoyles game in the '90s flashback episode and was the one to popularize the game by banning it, she might just be behind all the chaos. But while the theories show how Hermione could be the Gargoyle King, they don’t really answer why.

Hopefully, during the fall finale, fans will get some more insight into what the Lodges are really up to in and around town. Hiram has his claws deep within Riverdale’s institutions, and it looks like it has something to do with the “fizzle rock” drug that is tearing its way through the Riverdale community. Hermione seems perfectly poised in her seat of power as the town’s Mayor, and so far, it looks like she’s on board with the family’s growing criminal empire.

Hermione and Hiram are definitely up to something shady, and Nichols tells Romper that fans can expect to see them take things to a whole new level on tonight’s fall finale. “The Lodges, they go so far, so far,” says Nichols. “You know, Riverdale seems to be the most unluckiest town in the world, and tonight is no exception to how far the Lodges will go, and what happens in this town.”

After tonight’s episode — titled “Outbreak” — Riverdale will return in 2019 with its midwinter premiere on Jan 16. Nichols says that when the show comes back next year, things will start to get a little clearer for fans, and it should be worth the wait. “It starts explaining itself once it comes back,” she teases, “it’s really really fun.”

The fall finale of Riverdale airs on Wednesday, Dec. 12 at 8 p.m ET on The CW.

After experiencing a traumatic c-section, this mother sought out a doula to support her through her second child’s delivery. Watch as that doula helps this mom reclaim the birth she felt robbed of with her first child, in Episode Three of Romper's Doula Diaries, Season Two, below. Visit Bustle Digital Group's YouTube pagefor more episodes, launching Mondays in December.