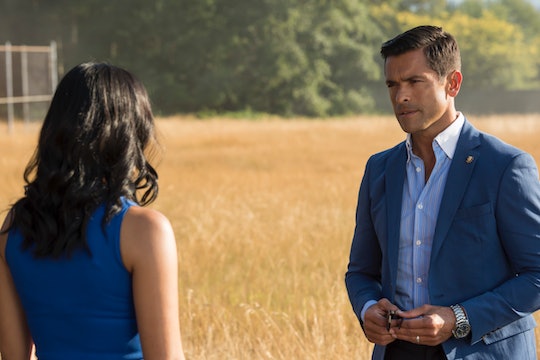 Hiram Lodge Is Shady AF, But Is He The Gargoyle King On 'Riverdale'?

Things aren’t always what they seem on Riverdale, and with all the sordid twists and turns, it’s hard to predict what’s coming. This season’s biggest mystery has to do with the Gargoyle King, a villain who has been killing kids in town. Since the past two villains on Riverdale have been parents, fans are wondering if Veronica’s criminal dad is the one behind the monster mask. So is Hiram Lodge the Gargoyle King on Riverdale?

The Gargoyle King’s true identity is still a mystery, but with the show’s pattern of parent murderers it’s not impossible that Hiram is the man behind the mask. However, while his criminal past includes a few indirect murders and a serious lack of ethics, dressing up in a skull and twig costume to romp around the forest doesn’t seem like Hiram’s jam. He’s a manipulator with access to people in high places, so the games he plays are much more sophisticated than a role-playing board game.

The Gargoyle King is the game master of Gryphons and Gargoyles — Riverdale’s version of Dungeons and Dragons — a game that manipulates people into making deadly decisions. Two students, Dilton and Ben, have already died playing the game. And in Episode 4, “The Midnight Club,” it was revealed that the Riverdale parents played the game in high school, which resulted in the death of their principal, Felix Featherhead. So far, it looks like the Gargoyle King gets players to believe that they have to ascend by sacrificing themselves, and has them drink a chalice of blue poisonous liquid to get to the next level.

All this pageantry seems a little much for Hiram’s character. He’s used to the finer things in life, and his games are more about self-preservation than blind manipulation or revenge. He has the town’s sheriff, warden, and mayor in his pocket, so he could do a lot more damage than just getting kids to drink blue poison. When Archie threatened to expose Hiram’s criminal dealings, Hiram hatched an elaborate scheme to frame Archie for murder, have him arrested, and then have him tortured in prison. It’s hard to believe that the same man would waste his time trying to play a game with high school kids.

So, if Hiram isn’t the Gargoyle King, who is? Well, while there are plenty of shady characters around town — including the Farm cult leader Edgar Evernever — some fans think that it might just be the other Lodge parent. Redditor Theynotsmarterthanus theorized that Hermione Lodge may be the Gargoyle King, and listed a number of clues that would point to her as the villain, including the fact that she was the one who initially opened the teacher’s drawer to unearth the game when they were kids. She has plenty of reason to manipulate the kids in the town, but because Hermione doesn’t seem like the type that would get her hands dirty, the Redditor suggested that she possibly hired a henchman to do the dirty work.

Another Reddit user, GentleCritter, thinks that Alice Cooper might be the Gargoyle King due to her deceptive personality, her vendetta against Jughead, and her previous involvement in the game. They noted that Alice has been caught lying about things since Season 1, and now after her husband Hal Cooper turned out to be the killer Black Hood, she may have lost her mind and returned to her Gargoyle King persona.

It looks like many fans are sticking to the pool of Riverdale parents to find their villain, and with the show’s track record, I can’t really blame them. However, as a fan myself, I’d personally like to see someone other than a parent be the killer this time around.