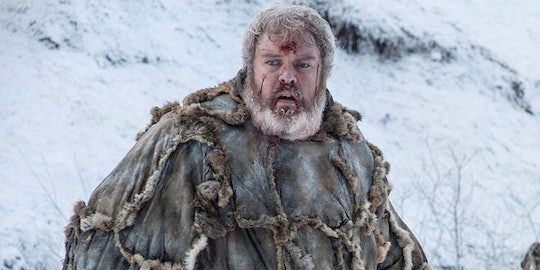 Is Hodor Dead On 'Game Of Thrones'? His Future Doesn't Look Good

Things took a very dramatic turn on Sunday's episode of Game of Thrones. Sure, there was some community theater that seemed to just pass the time, but that was all made up for when the White Walkers attacked Bran, Hodor, and Co. And, unfortunately, things didn't turn out very well for Hodor. So, is Hodor dead on Game of Thrones? Either way, his future isn't looking too good.

On Sunday's episode, one of the biggest mysteries of Season 6 was revealed. Why does Hodor only say Hodor? Well, it's kind of complicated, but I think we got our answer. In an urgent exit from the tree they were staying with the Three Eyed Raven, Bran warged into Wyllis, to try to warg into Hodor — through time — which seemed to result in the Hodor the show now knows. This seems to also be the reason Hodor says Hodor, because he kept hearing the screams to "Hold the door" from the White Walkers. Yeah, it's complicated.

Unfortunately, the White Walkers seem to have gotten to Hodor. Holding the door only worked for so long. It's assumed that Hodor is dead, but that's not the only option. Either option isn't good news for our guy Hodor.

At first glance, yes, it appears as if Hodor is dead on Game of Thrones. It's tragic news. He was always there for Bran, which hurts even more because he was doing this to protect Bran. But, the other option — perhaps the more tragic option — is that Hodor becomes a White Walker. Imagine if after all this — after our hearts were ripped out and stomped on with a spiked shoe — Hodor came back as a White Walker.

The thing working against this theory is — as sad as it is — this is Hodor's pre-determined life. Even though Bran warged into Wyllis, he didn't change the future. He just brought the present to fruition. So, chances are Hodor won't become a White Walker. Unfortunately, this doesn't bring our sweet Hodor back to life.