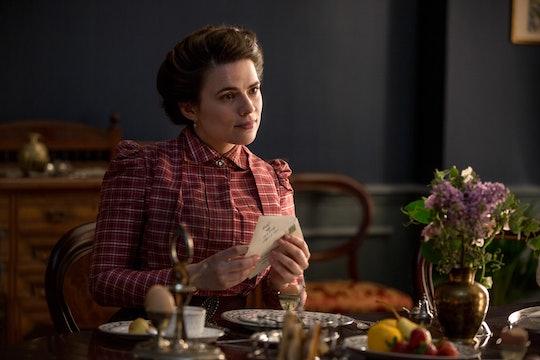 Starz is gearing up to debut a new period drama and it's perfect for fans of Downton Abbey and The Crown. The new series, called Howards End, is based on the novel of the same name by E.M. Forster, published in 1910. The story follows the intersection of the lives of three families — the Wilcoxes, the Schlegels, and the Basts — at the country home known as Howards End. But is Howards End a real place?

Technically, Howards End is fictional, but according to Radio Times, the inspiration for Howards End came from Forster's childhood home, Rooks Nest, which was very much a real place. After his father died from tuberculosis, Forster's mother took him to the countryside so they could hopefully lead a healthier life there. Forster lived in Rooks Nest, which was in Hertforshire, from the age of two to 12. So even though a location by the name of Howards End does not exist, the inspiration behind it is from a very real place.

The new series actually premiered back in November on BBC and received stellar reviews. The show stars Hayley Atwell as Margaret Schlegel, a 29-year-old woman of mixed English and German heritage living in London in the early years of the 20th Century. She is the chief representative of the Schlegel family.

If you're unfamiliar with Howards End, each family is of a certain class and moral standard. The Wilcoxes are wealthy, the Schlegels are also wealthy but morally idealistic, and the Basts are in the lower-middle class. Starring opposite of Atwell is Matthew Macfadyen as Henry Wilcox and Joseph Quinn as Leonard Bast. Also starring in the series are Philippa Coulthard as Helen Schlegel; Alex Lawther as Tibby Schlegel; Joe Bannister as Charles Wilcox; Tracey Ullman as Aunt Juley; Bessie Carter as Evie Wilcox; and Rosalind Eleazar as Jacky Bast.

When the story begins, Helen and Paul had a brief romance that ended badly so the Schlegel family decide they will have nothing further to do with the Wilcoxes. Of course, this doesn't last for long. Once Helen and Paul are both out of town, the Schlegel's decide they can once again interact with the Wilcoxes, but before Helen jets off to Germany for vacation, she accidentally takes the umbrella of Leonard, bringing the Basts family into the mix.

The novel has become a classic that was first adapted into a Oscar-nominated film in 1992, starring Emma Thompson as Margaret, Helena Bonham Carter as Helen, and Anthony Hopkins as Henry. Thompson's role even won her her first Oscar. Forster's look into class and morality in early 20th century Britain is a timeless tale that still feels relevant to this day. In every iteration of the story, Margaret remains a fierce protagonist who also gets swept up in a love story.

Additionally, the story of Leonard Bast, who struggles to climb his way up in society, remains an al- too relatable story for many, and his role in the novel, and now the TV series, continues to be a controversial one (you'll have to watch the show or read the book to find out why).