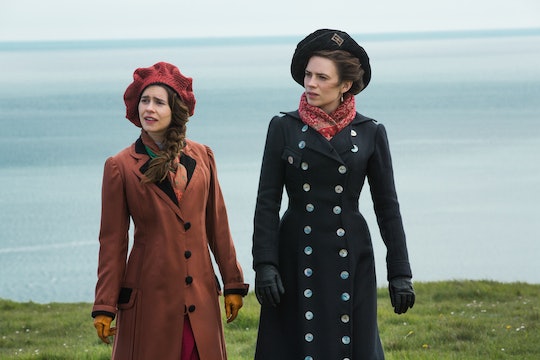 I love a good period drama, which is why I was so excited to hear about the new show, Howards End, premiering on Starz. If you're as big a fan as I am of long skirts and stuffy British accents, you'll probably want to know more about the show itself. For example, is Howards End based on a true story? The show is adapted from a classic novel by E.M. Forster of the same name. So while yes, the story is purely a work of fiction, its themes are still very relevant today.

You may recognize Forster from your high school or college reading list. That's because he is also the author of the classic book, A Room with a View, which was also adapted into a classic film starring a very young and ingenue-like Helena Bonham Carter as well as Dame Maggie Smith and Dame Judi Dench. As far as period dramas go, A Room with a View is one of the very best. A Room with a View explores themes of class, hypocrisy, and life as a well-brought-up young woman. Howards End explores those same themes, though the previews of the show promise that there will be some melodrama and intrigue as well as serious meditations on propriety. I could not be more excited for this.

The story follows two unmarried, upper middle class sisters, Margaret and Helen Schlegel living in Edwardian London with their aunt. The sisters' lives become complicated when Margaret strikes up a friendship with a wealthy, ailing woman named Ruth, who leaves Margaret her family estate after her death. Things only get more complex when Margaret begins a relationship with Ruth's widower, Henry Wilcox, while Helen tries to help the life of a working class man named Leonard Bast. The book was adapted into a well-beloved movie in 1992 starring Anthony Hopkins and my personal hero, Emma Thompson.

This adaptation was written by Kenneth Lonergan, best known for writing and directing the Oscar-winning Manchester by the Sea. The four-part series first aired as a BBC miniseries, and received glowing reviews. Though he may seem like an unlikely choice to write a period adaptation, in an interview with the L.A. Times, Lonergan said he was attracted to the project because it was a period piece. In writing it, he said it was important to him to maintain the language of the period, citing BBC's masterful Pride and Prejudice adaptation (starring Jennifer Ehle and Colin Firth) as an inspiration. "To me, it's like an opportunity to make it colorful and interesting, alive and connect you with a different culture and a different time that's very alive," he said. "They were stiff and formal but they still had the same gamut of emotions we have. They're just channeled through different apertures."

The series stars Hayley Atwell as Margaret and Philippa Coulthard as Helen, with Matthew McFayden, Tracey Ullman, Joseph Quinn, and Julia Ormond in supporting roles. A review of the miniseries in The Guardian states:

Though some of the finer points of Edwardian class distinctions and propriety may elude us at this distance, the question at the core of Forster’s work of who will inherit England, has perhaps never been as relevant since he first posed it, and the introduction of non-white characters connects it more emphatically to the present.

The original book is considered by some to be Forster's masterpiece, so it's honestly a shame that it hasn't been recreated for modern audiences more often. However, I am so excited for this edition, and expect it to be added to my regular rolodex of period miniseries that I watch again and again.