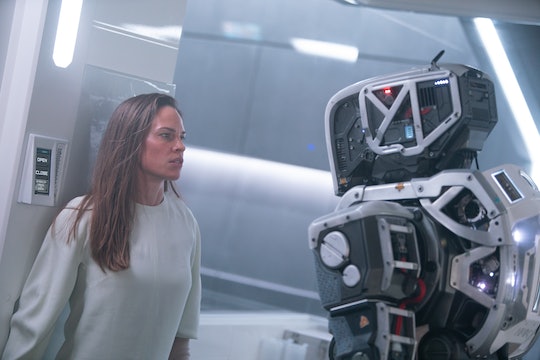 People Want To Know The Origin Story Of 'I Am Mother'

Netflix has made a lot of content based on books in recent years, and its latest acquisition from Sundance definitely has a plot right out of a sci-fi novel. So, you're not wrong to wonder if I Am Mother is based on a book. The answer is more complicated than I expected it to be.

I couldn't find an official source saying I Am Mother is based on a book, but that doesn't mean it doesn't have literary roots. From the looks of things, the plot of the movie, written by Michael Lloyd Green, reminds people on the internet of Tony DiTerlizzi's children's sci-fi novelThe Search for WondLa.

The premise of the movie is that a young girl called only Daughter (Clara Rugaard) is raised in a bunker by a robot she is taught to call Mother (the voice of Rose Bryne). Daughter is told she's the only human left on Earth and that she has the task of repopulating it. But every truth she has learned from Mother becomes uncertain when an injured stranger (Hilary Swank) arrives inside the bunker and offers her an entirely different truth. She must decide who (or what) to trust and risks her life in the process.

Amazon's synopsis of The Search For WondLa reads in part, "When a marauder destroys the underground sanctuary that Eva Nine was raised in by the robot Muthr, the twelve-year-year-old girl is forced to flee aboveground." So, I can understand why people are saying the two stories are similar.

However it doesn't look like evidence for the movie being related to this book goes any farther than internet speculation. And I wouldn't exactly classify I Am Mother as a child-friendly film. The trailer is straight out of my nightmares. But something tells me there is more to this film than meets the eye.

Swank told Parade, "A massive factor in what drew me to the script was that it had so many layers and it touches on conversations that we should be having about AI becoming so prevalent in our society."

Rugaard told SyFy Wire there's also a more human lesson to learn. "It's the theme of nature versus nurture and how you bring that forward," she said. "It's female characters telling a really interesting story, and I loved being a part of telling it."

She hopes I Am Mother is the first of a new type of film in the genre. "I hope it inspires people to see that women can provide exhilarating performances in action films as well — sci-fi action. It's quite rare to see that," she said.

Ironically, though Bryne plays the voice of her mother, Rugaard didn't work with her on set, because Mother's voice was within the physical body of actor Luke Hawker. "I was working with Luke the entire time, who was providing the lines and providing a performance inside the suit. So yeah, he was Mother to me," Rugaard told Syfywire.

She admits the process was strange, but the maternal connection was still there. "...I take my hat off for this man," she said of Hawker. "He made my life so much easier because we developed a great bond on set and throughout the process, and he truly became Mother to me. There was so much energy to bounce off of because he's just brilliant."

You can stream I Am Mother now on Netflix — and if you're intrigued about the story check out The Search For WondLa.