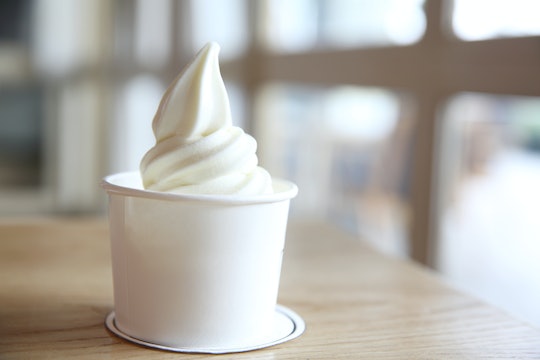 Easily one of the best parts of pregnancy is the fact that no one looks askance at you while you fully enjoy your meal and an ice cream or two. For instance, I became such a regular at Shake Shack while pregnant that they would start preparing my custard when they saw me get on the line. Mine was also bigger than everyone else's, drawing a sharp eye from some jealous restaurant-goers, and making me squee in delight. Lately, there's been some discussion as to the safety of my favorite frozen treat. Is ice cream safe to eat during pregnancy, or does it harbor some bacteria I was unaware of at the time?

There are some ice creams for which you need to be concerned over, like custards and soft serve. For one, you want to make sure that if you're eating custard, there are no raw eggs in the preparation, as per the Food and Drug Administration (FDA), since raw eggs can carry the salmonella virus. Cooked egg custards, however, are just fine and totally delicious. The other worry is soft serve ice cream. While these typically don't contain raw eggs, if the store preparing the ice cream doesn't keep rigid cleaning standards, listeria can grow in the machine that dispenses the ice cream, noted The San Fransisco Gate. Generally, though, if you trust the shop, you can have the ice cream.

Listeria is no joke. According to Epidemiology and Infection, while listeria isn't typically considered all that dangerous for the majority of the population, it can have a devastating impact on fetal development. Salmonella carries a similar risk, as well as risk for the immunocompromised pregnant mother. It's a bit of a nasty bacteria that can not only cause severe gastric upset, dehydration, and even death in pregnant women, it can also lead to miscarriage or birth defects in an unborn child, noted The Journal of Immunology.

Thankfully, these complications are fairly rare, and easy to get around. Store-bought ice creams like the ever-delicious peanut butter fudge from Haagen-Dazs or your Americone Dream varieties aren't going to put you at risk for anything more than a cavity or some rather unfortunate bloating that makes the maternity band of your pants dig into your hip more forcefully than you'd think possible. (I was under the impression there would be far more stretch in these pants than what I've experienced.)

Is ice cream safe to eat during pregnancy if you have other health concerns? Unfortunately, many of us will develop gestational diabetes during our pregnancies, making foods like ice cream strictly forbidden. It's really disappointing, and hugely unfair, but there you have it. There are alternatives if you're craving a frozen treat, like banana soft serve, which is made from frozen ripe bananas that are puréed in the food processor, or lightly sweetened granita, which is frozen coffee that is scraped periodically with a fork as it freezes to break up the crystalline structure. While this is not the same thing at all as Chunky Monkey or custard concrete, it's also not half bad when it comes down to it.

The bottom line is that your ice cream should be prepared or served in a facility that is clean and safe. You should make certain that there are no raw eggs in the preparation of the ice cream so you can avoid the danger of nasty salmonella, but you should also enjoy this time you have to lick off every errant sprinkle that lays atop your treat. Trust me, ice cream tastes even sweeter when you're pregnant.

More Like This
Is Raspberry Leaf Tea Safe To Drink During Pregnancy?
Guys, We Need To Talk About Pregnancy Farts
Is Vape Smoke Bad For Pregnancy? Experts Explain The Risks
14 Recipes For Sick Kids When Everyone's Tired Of Canned Soup & Crackers
What Parents Are Talking About — Delivered Straight To Your Inbox