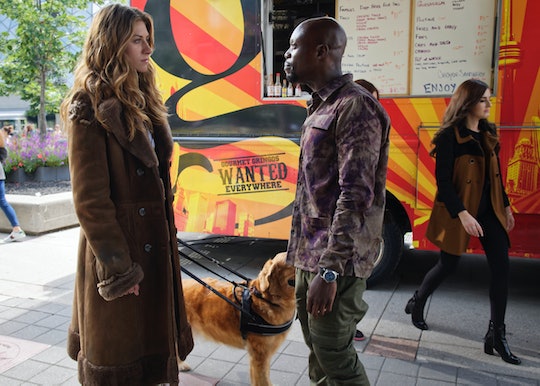 'In The Dark' Was Inspired By *This* Fantastic Organization

Sometimes you can't help but wonder if the inspiration for your favorite shows or movies were based in reality. With The CW's In the Dark about to hit the airwaves, you'll probably watch thinking how realistic the portrayal of the story feels, but is In the Dark based on a true story? It turns out — not so much.

First of all, don't get The CW's In the Dark confused with the In the Dark podcast. One is a work of fiction about a blind woman who witnesses a murder, and the other is a disturbing true story about a man tried for the same crime six times. Yikes.

The show follows Murphy Mason (played by Perry Mattfeld) who is apparently the only witness in the murder of a friend, Tyson, who once saved her from a violent mugging. While out for a walk with guide dog, Pretzel, she seems to find Tyson's dead body. But by the time the police arrive the body has disappeared, leaving Murphy to try to convince them that she really did find him there. However, because she is blind, she is having a hard time convincing them that she knows what she's talking about.

From there, Murphy — who stumbles through life as a drunken, sarcastic mess — tries to sell police on her story, but they don't seem to care much, leaving Murphy to find the killer herself. She does all of this while working a job she hates at Breaking Blind, a school for guide dogs that her overprotective parents own, and still manages to do the whole dating thing. Not well, but you've got to give her points for trying. According to Deadline, she's joined by slightly smothery best friend Jess and Darnell, Tyson's cousin who mistrusts Murphy at first, but eventually decides to join her in her quest for justice.

Though all of this seems fairly outlandish, there are some realistic elements to the show. During the 2019 Winter Television Critics Association Press Tour, show consultant Lorri Benson, who is blind and uses a guide dog in real life, and creator Corrine Kingsbury spoke about why they didn't cast a blind lead, explaining that Perry Matfield, who plays Murphy, was simply the best choice "in a really exciting way." They didn't cast a real guide dog because a real guide dog would be confused by multiple takes. "When I repeat it’s because he made an error. He would slowly break down because he did not know what he was doing wrong."

They did hire blind actress, Calle Walton — who, according to Entertainment Tonight, they discovered during a visit to a school for the vision impaired and cast in a supporting role. The series names Ben Stiller as an executive producer and the idea for the show itself came organically from their social good program, CW Good that partnered with Guide Dogs of America. Their initiative was to sponsor puppies that would be trained as guide dogs. It's that little seedling that produced this idea with a blind lead and her guide dog. Pretty cool.

That's a whole lot of creativity in the realm of fiction of you ask me. You'll hardly miss the fact that In the Dark isn't based on a true story — especially with Pretzel (who's real name is Levi) as Murphy's amazing guide.

This article was originally published on April 1, 2019