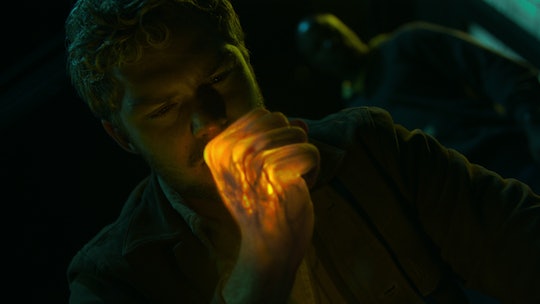 Will Iron Fist Cross Paths With Frank Castle In 'The Punisher'?

It's been over a year since the Punisher, whose real name is Frank Castle, was first introduced in the second season of Daredevil, and fans have been impatiently waiting for his own series ever since. But while fans are very excited to be reunited with Frank, they're also wondering if there will be any familiar faces in the new Marvel Netflix series. The shows tend to crossover and it's already been confirmed that Karen Page will be a recurring character. But what about the Defenders? Specifically, is Iron Fist in The Punisher?

Unless Marvel and Netflix are keeping this secret under wraps, it looks like the defender of K'un-Lun won't be joining forces with Frank any time soon, but it's probably better that way, if I'm being honest. Out of all of the Marvel Netflix collaborations, Iron Fist did the worst in terms of critical acclaim and fan appreciation. Unfortunately the story of Iron Fist, also known as Danny Rand, just didn't resonate with viewers, and many were uninterested in the plot of the series.

However, through The Defenders, Danny as a character seemed to improve to viewers, but this was mainly because of his friendship and quasi bromance with Luke Cage. It's why fans weren't all that surprised that Danny will make an appearance in Season 2 of Luke Cage.

Though Danny certainly has fans, he definitely doesn't have enough to be a helpful addition to The Punisher, meaning people wouldn't tune in just to see him. More importantly, though, it wouldn't really make sense for Danny to be a part of The Punisher. Frank and Danny have very different personalities and ideologies. Frank is a man of action who fights with guns and heavy artillery. Danny is a monk whose power comes from a mystical land that Frank probably wouldn't even believe in.

Sure, it could be funny to see these two interact, but more than anything it'd probably get in the way of the real plot of the series, which is Frank uncovering a governmental conspiracy that ties back to the murder of his family. It makes sense that Karen's part of the show, since she was the one who first befriended Frank and is now an investigative journalist who could actually help him research this conspiracy. Plus, knowing Karen she'll also want to cover the story for the newspaper. Though, surprisingly, she wasn't supposed to be a part of the show originally.

Showrunner Steve Lightfoot had to ask Marvel if she could be included in the show, because after seeing Karen and Frank's chemistry in Daredevil, he knew he had to have her in the show. Thankfully, Marvel agreed.

While Karen will be included, there's one Marvel character who definitely won't be in the new series. Although Claire Temple has appeared in every Marvel Netflix series thus far, she won't be in The Punisher. Unfortunately, Rosario Dawson, who plays the beloved and badass nurse, wasn't able to commit to a cameo this time around. "At the end of the day, it's really hard to get all of those casts together," she told Collider. "There are so many times where I really want it to happen. I really wanted to do a cameo on The Punisher, but it doesn't always work that way."

Despite Claire's absence and the lack of Iron Fist, The Punisher has an amazing cast of characters who will round out the show and it'll surely still do just as well as the Marvel Netflix series that came before it.