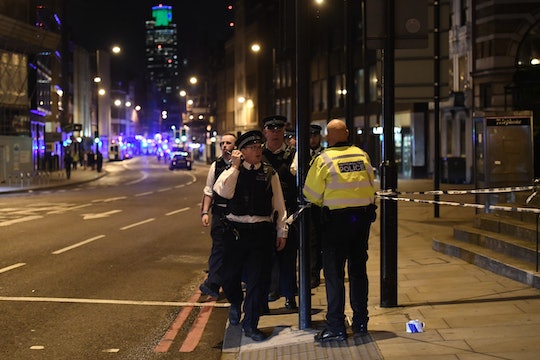 Is ISIS Responsible For The London Bridge Attacks?

Multiple attacks in London on Saturday evening left people of the city shaken and fearing for their safety. Though reports on the incidents — which occurred at the London Bridge and Borough Market — are limited as of now, many people are wondering where to point the finger of blame. More specifically, people are wondering if ISIS is responsible for the London Bridge attacks.

The nearby Vauxhall stabbing was later declared not to be part of the London Bridge attack, but a separate incident. ISIS has not yet claimed responsibility for the attack, although some outlets claimed sympathizers were reportedly "celebrating" the incident. This has not yet been confirmed by authorities.

EARLIER: According to initial reports from the BBC, police officers and paramedics responded to a "major police incident" on the London Bridge at about 5:45 p.m. ET. The news outlet noted that the authorities were called in after several pedestrians had been hit by a vehicle on the London Bridge. BBC reporter Holly Jones, who was on the scene at the time, told the outlet that the van appeared to be driving at 50 miles per hour — 30 miles over the London Bridge's speed limit of 20 miles per hour.

The Saturday incident on the London Bridge and in Borough Market are eerily familiar to the March 2017 incident in which a car ran down pedestrians on the Westminster Bridge and proceeded to the House of Parliament. The incident left five dead and roughly 40 injured. ISIS claimed responsibility for the UK Parliament attack the following day, according to Fox News.

To add to the ISIS suspicion, the London Bridge attacks come almost two weeks after the Manchester concert attack took the lives of 22 people and injured 59 others who were attending an Arianna Grande concert. The following day, ISIS claimed responsibility for the Manchester concert attack, according to Fox News. Shortly after the Islamic State claimed responsibility for the second attack, The New York Times reported that the terror alert in Britain was raised to maximum.

Though details on the London Bridge and Borough Market attacks are limited at the time, it's understandable why people may be quick to assume ISIS is behind the attacks. It is important, however, not to jump to conclusions and instead, focus your energies on helping those who have been affected by the incidents.

More Like This
Teacher Shot By 6-Year-Old Student Told School He Had A Gun, Was Told To "Wait"
Watch An Exclusive Sneak Peek At 'The Amazing Maurice'
'Bachelor' Alum Sarah Herron's Baby Boy Died Shortly After Being Born At 24 Weeks
Kate Middleton Is Not Expecting This Classic Valentine’s Day Gift From Prince William
What Parents Are Talking About — Delivered Straight To Your Inbox