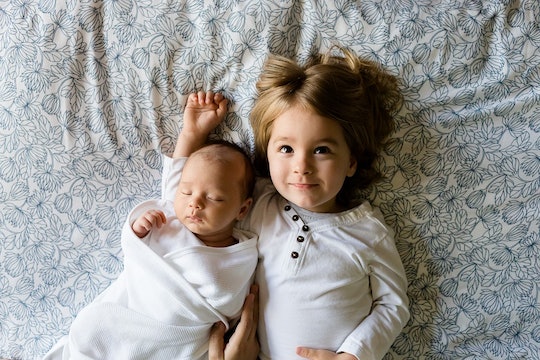 Is It Bad To Have Kids Close In Age? It Depends On Who You Ask

Once you have your first baby, you're inevitably hit with questions about when you're planning to "pop out the next one." Or at least that's how it felt to me. People automatically assumed that we planned to have another child soon (Spoiler Alert: we did — I got pregnant 13 months later.) And though it's really no one else's business, it's natural for parents to wonder is it bad to have kids close in age.

Many parents choose to have their kids close in age in hopes that it will help foster close relationships between their children as they grow up. It also means your kids will be in relatively the same phases of life, so things like school, sleeping arrangements, and their interests will be somewhat consistent.

However, there are a few medical issues to consider before deciding whether to have your kids too close together. According to the Mayo Clinic, there is limited research that suggests that having pregnancies within 12 months of each other increases the risk of complications like placental abruption, C-section, or even autism. Furthermore, pregnancy within 18 months of giving birth may be linked to lower birth weights or preterm birth.

It can be difficult on your body to have pregnancies too close together too. According to Women's Health, some experts believe that a mother's body doesn't have enough time to restore an optimum amount of nutrients after subsequent pregnancies and breastfeeding. The best time, according to the article, is to space your kids between two and five years apart.

However, sometimes it isn't possible to perfectly space out your kids, so speaking to your doctor before you consider conceiving again will at least rule out any immediate risks. Of course, any potential risks doesn't have to keep you from having the family of your dreams. If having children close in age is how you want your "family plan" to pan out, then do the research and make the best decision for you and your family.