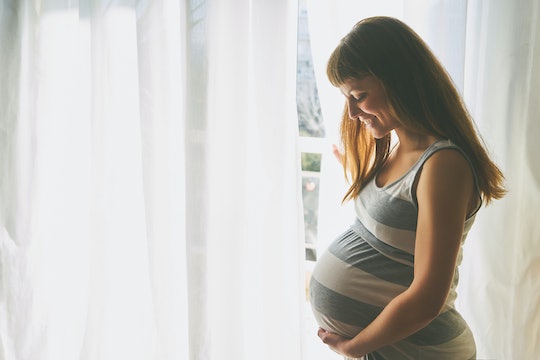 What Exactly Is Leaking Out Of Your Breasts When You're Still Pregnant?

When you're pregnant, you never know what your body is going to do next: From sprouting brand new stretch marks overnight to suddenly hating foods you loved for your entire life, it's just one (not necessarily pleasant) surprise after another. Take, for example, when your breasts suddenly start leaking months before you're due. It can be quite a shock when you wake up with a soaking wet shirt in your second or third (or even first!) trimester. So if your breasts are leaking before your baby is born, is it colostrum or breast milk that's being produced?

Depending on the person you talk to, it could be tough to get a straight answer. That's because not every pregnancy develops according to schedule, as you've likely noticed, no matter what your doctor might say.

"The 'official word' is that breasts start developing colostrum at around 14 weeks but I know lots of women whose breasts leaked weeks before that," Jeanne Faulkner, R.N., wrote for Fit Pregnancy.

"I don't imagine our breasts are tied to a fixed schedule and they tend to do their thing on their own time clock. Some women leak, some don't. Some women still aren't leaking anything even after delivery but manage to produce plenty of milk. Virtually all of us are fully capable of breastfeeding our babies right around the time our babies are ready to eat — right after birth."

With my first pregnancy, I was completely taken off guard when I started leaking a clear, yellowish fluid at around six months. Nobody had warned me that leaking colostrum during pregnancy was a thing, and this wasn't just a drop or two, either... I actually had more of a need for nursing pads before I gave birth than after. Interestingly enough, I didn't experience any leaking during my second or third pregnancies. And while I didn't have milk supply issues with any of my babies, I will say that my production was particularly plentiful with my first (so maybe leaking is a indicator of abundance?).

Either way, if you start leaking during pregnancy, it's definitely a sign that things are in good working order.

"Your pregnant body is making sure all systems are a go, including your milk production system," explained WhatToExpect.com.

"Colostrum, the first milk your baby will get, contains more protein but less fat and sugar than more mature breast milk, making it easier for baby to digest in the first few days after birth," the site continued.

Colostrum (otherwise known as "liquid gold") is also packed with antibodies (immunoglobin A, or IgA) that will help help to protect your baby from germs that can infect the mucus membranes of the lungs, intestines, and throat. A few days after you give birth, when your milk finally "comes in," it will be whiter and you'll have more of it (much, much more).

As odd and unfamiliar as it might seem to suddenly have clear liquid leaking out of your boobs, this isn't generally cause for concern. If the fluid looks a little bloody, however, you should call your doctor, according to an article on Parents — even though probably isn't a sign that anything is wrong.

"Many times this is nothing to worry about; it's caused by the major changes your milk ducts are undergoing as they prepare for lactation," the article explained.

Usually, a bloody tinge will disappear after delivery and won't interfere with breastfeeding. (If it doesn't, your doctor might do testing to figure out the cause; 90 percent of the time, "persistent bloody discharge" is caused by some type of treatable infection or a benign growth.)

Leaking colostrum during pregnancy might seem strange at first, but it's also completely normal and might even be a positive sign. Think of it as practice for the soggy bras and shirts you'll have to deal with when breastfeeding really begins!